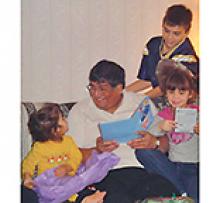 
Peacefully, and with his family by his side, the world lost a great Metis man on Monday, September 30, 2019. It is with profound sadness that we, the family, announce the passing of our husband, dad and Pepere, Maurice Toussaint Simon Chartrand, at the age of 77.
Dad is survived by his loving wife of 51 years, Dorothy, daughters, Arlene, his baby girl Tina (Darren), his three grandchildren he was so incredibly proud of, Jared (Jackie), Tara (Maison) and his Little Man Ryan, and his fur babies, Rosie and Princess; as well as his siblings: Laura Minchin, Remi, Sylvia (Cal) Hurley, Linda (Dave) Jones and Sophie (Jerry) Hopps, his Sutherland in-laws, and his many nieces and nephews from both the Chartrand and Sutherland clans. Dad was predeceased by his parents, Simon and Alma Chartrand, his brother Victor, and son-in-law Glen Desjarlais.
Dad was born on November 19, 1941 in Eriksdale, Manitoba to Simon and Alma Chartrand, he grew up in St. Laurent where he was a very proud Metis fisherman. It was at the tender age of 16 he moved to Winnipeg and where he resided until his passing. Dad worked hard his whole life and told many stories of his adventures with his various jobs. Some of his best stories came from his lifetime with the City of Winnipeg Transit where he worked for 35 years and retired from in 2001.
Dad met the love of his life, our mom Dorothy in 1963, and they married on September 21, 1968. They spent the next 51 years together loving each other and were truly partners for life. Dad was a strong, humble man who took great pride in his family. He made sure to instil in both his daughters and grandchildren to live our lives as good people, always be kind and good to others and always remember you only come into this world with your good name so take good care of it. Always take pride in all that you do or say and never let others make you believe otherwise.
Dad had many friends over the years and he always had many stories to share of the times he spent with them. There was always another new story to be heard and so much laughter to go around. Both the Chartrand and Sutherland families always knew that Dad brought the party with him wherever he was. His big, humble and sometime stern personality was something of a force to reckoned with, he always meant what he said and said what he meant - but that's why he was loved so much by both families and he will be greatly missed.
Dad will be cremated and honorary pallbearers will be Jared Berthelette, Tara Berthelette, Ryan Chartrand, Albert Coutu, Elmer Gaudry, Robert Gaudry, Dwight Cochrane and Stanley Spence. Celebration of Life will be held on Thursday, October 10, 2019 at 1:00 p.m. at Cropo Funeral Chapel, 1442 Main Street.
In lieu of flowers, donations can be made to the Heart & Stroke Foundation in Dad's memory.