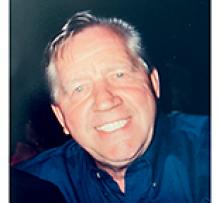 It is with great sadness, that we announce the death of our father Kell (Niels) Smalby.
He will be lovingly remembered by his sweetie Ingrid, his children, Michael, Janice and Lori (Shawn), and two granddaughters, McKenna and Hayley. His sister Sonja (Doug), brother-in-law Lloyd (Dana), and his nieces and nephews, Shirley, Holly and Andrew.
He was predeceased by his father and mother, Frode and Anna Smalby.
Kell was born in Aalborg, Denmark on April 10, 1944, and his family immigrated when he was just nine years old. Growing up in Winnipeg, he went to Nelson McIntyre High School and then started his working life with the City of Winnipeg. He retired to play in the PGA but failed miserably and could only make it with the Garden City Seniors golf club. He made friends that he considered family and had too many to name. He spent a lot of time with them on the courses and his numerous affiliations like the Canadian Legion and other charities. He loved to travel and spent most winters in warmer climates so he could sharpen his golf game.
Special thanks to the staff on ward D4 at Health Sciences Centre for their care and respect in our dad's final days.
No formal service will be held upon his request.

Condolences may be left at seasonsfunerals.ca
,