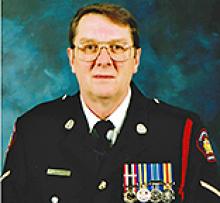 
Arthur Douglas Chrismas, passed away peacefully on October 3, 2019, in Cardston, AB, at the age of 67 years.
Arthur Douglas Chrismas was known by those close to him as Doug. He was born in Winnipeg, Manitoba, but he raised his family in Alberta.
He is survived by his wife of 47 years, Star Chrismas, and five children, Anthony
Chrismas (Patricia), David Chrismas
(Adriana), Scott Chrismas, Karen Thomas (Dwayne), and Heather Campbell (Doug). He is also survived by his brother Robert (Bob) Chrismas (Barb), sister Debra Simmons (Charlie), and mother Violet Chrismas. He is survived by eight grandchildren, Joshuah Chrismas, Megan Chrismas, Christina
Chrismas, Maddison Thomas, Preston
Thomas, Donald Campbell, Taylor Campbell, Daniel Campbell, and numerous nieces and nephews. He is predeceased by his father Douglas George Chrismas.
Doug was dedicated to his family and worked hard to provide for them. He served 11 years in the Canadian military. He served with the PPCLI, Service Battalion, and served in Lahr, West Germany with the CALM group within the Canadian Air Force. He then served 27 years with the Calgary police force and retired as a Senior Constable First Class. After retirement, he devoted many years in helping residential school survivors. Doug felt a moral obligation to help others and
devoted his life to that work.
Doug considered himself a modern
renaissance man. He had a passion for
painting, especially mountains. He loved good music, with a particular fondness for the
Beatles. Doug was also an amateur historian, with a focus on 20th century war history. He has collected countless books and movies to quench his thirst for knowledge.
He was a deeply spiritual man, and at a young age felt a particularly close
relationship to his Father in Heaven. As an adult, while serving in Germany, he joined The Church of Jesus Christ of Latter-day Saints. His testimony of his Heavenly Father and Jesus Christ never left him.
Doug left behind a legacy of love and
service that is felt by all those that have
associated with him. The world is better for having him, and he will be dearly missed.
For those who want to be a part of Doug's legacy of service, they can donate to the
Calgary Police Foundation. Mail Code #987 5111-47th Street N.E. Calgary, AB T3J 3R2. The Calgary Police Foundation has donated money to countless services, including the Victim Assistance Unit, which Doug served in.
The family would like to express deep
gratitude towards all the doctors and medical professionals at the Lethbridge Cancer
Centre, the Cardston Hospital, the Cardston Clinic, and CBI Home Health, for the care they provided for Doug during his illness.
The funeral service will be held at The Church of Jesus Christ of Latter-day Saints, Cardston, Alberta, West Stake Center, (846 1st Ave. W., Cardston, AB) on Wednesday,
October 9, 2019 at 11:00 a.m. Friends may meet the family at the church from 10:00 a.m. to 10:45 a.m. prior to the service. Interment to follow in the Leavitt Cemetery.

Condolences may be sent at:
www.legacyfuneralhome.ca