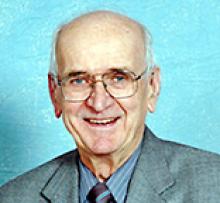 
John Dueck was born on January 25, 1926, in the Kronsgart district south of Plum Coulee, MB, to Jacob P. and Anganetha Dueck, the eighth of 12 children. Ten grew up to become adults, six girls and four boys. When John was one year old the family moved to the district of Rose farm, north of Horndean.
John died October 3, 2019, at Pembina Place Bethania Mennonite Personal Care Home, where he had been a resident for five years.
John was a farmer all his life. That career began in 1950, with his first land purchase near Lowe Farm. In his later years John was a trailblazer in the practice of low tillage farming, which meant that he only worked the soil for seeding.
While John enjoyed farming, he had time on his hands, and a willing heart and mind to help and serve others. In the summer of 1951, he went to Matheson Island, MB for two weeks to help build a house for the mission workers there. That willingness to serve carried on for 33 of the next 54 years. The places John served stretched from Northern Manitoba to Akron, PA. This included C.M.B.C. here in Winnipeg, Ailsa Craig Boys Farm, and Warden Woods Church and Community Centre in Ontario.
John's spiritual nurture began in the home under the care of devout Christian parents. He was baptized at the age of 18. That year he also stood before a judge and declared himself to be a conscientious objector. John became a committed advocate for the promotion of peace and justice. In due course he became a visitor in the Open Circle program visiting men in prison. Then he joined the Circles of Support and Accountability, meeting with high risk offenders after they were released from prison. He was a strong supporter of Project Peacemakers, Canadian School of Peacebuilding, Christian Peacemaker Teams, MEDA, M.C.C., and the Canadian Foodgrains Bank
As a single person John was happy when an adult single's fellowship group was organized in the mid 1960s. This group met regularly for retreats, fellowship and recreational meetings. John was on the planning committee for many years. He also took an active part in a Bethel Mennonite Church K-group, was part of a golfing group, bowling league and a breakfast huddle.
John is survived by sister Agatha, brother Henry (Marie), numerous nieces, nephews and their families.
He was predeceased by his parents, two infant siblings, adult siblings and spouses: Peter (Helena), Mary (Jake), Tina (David), Nettie (Jake), Jake (Agnes), (Elmer), Margaret, Lena; two nephews, one in-law niece, three in-law nephews, and one grandniece.
As John's siblings we express words of thanks to the dedicated staff at Pembina Place Care Home.


At the end of his life Francis of Assisi is to have said: "I have done what is mine to do; may Christ teach you what is yours"

If friends so desire, donations can be made to the Pembina Place Resident Room Furniture Project, or the Canadian Foodgrains Bank.
The funeral service will take place on Friday, October 11, 2019, at 10:30 a.m. at Bethel Mennonite Church, 465 Stafford St., Winnipeg, MB, with viewing prior to the service. Burial will take place at Rose Farm Cemetery, MB.