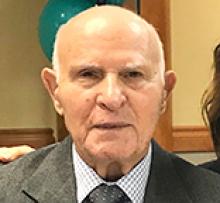 
It is with much love that we announce the peaceful passing of our father and nonno, Giuseppe Allegro, during the morning of October 7, 2019.
Giuseppe was born in Camastra, Sicily, to Tomasina and Biago Allegro, the youngest of six children. He was predeceased by his parents and his five siblings: Cologero, Andrea, Maria, Anna, Pina, and wife Angelina.
Giuseppe is survived by his four children: Sina (Cesare) Sacco, Gino (Holly), Charlie (Donna) and Ross (Cheryl) Allegro; and his eight granddaughters: Jennifer (Hart) and Ashleigh (Dimitri) Sacco, Kaila, Samantha, Hailey, Abigail, Bronte and Gillian Allegro, as well as many nieces and nephews throughout Italy and Germany.
At the age of 11, Giuseppe's father passed away, while his two older brothers were away at war. Giuseppe had to stop going to school in order to provide for his mother and sisters. Taking on this great responsibility at such a young age formed and influenced his extremely hard working and entrepreneurial drive for the rest of his life.
At the young age of 21, he moved to Belgium to work in the coal mines, a job where the stakes and future health implications were extremely high, yet it was the only way he could support his family in Sicily. After surviving three grueling years, and having learned his second language, French, this allowed him to apply entry to Canada without sponsorship. He arrived in Winnipeg (via Halifax) in 1952.
Upon arriving to Winnipeg he stayed at the Via Rail train station, which housed a number of immigrants at the time. Given that he spoke Italian and French he was able to communicate to others as to where he could find work. He was advised to apply for employment at CN Railways, where he would eventually work for the next 40 years.
During his time at CN, he married Angelina by proxy and sponsored her and her family to immigrate to Winnipeg, Canada, where they raised their four children. Giuseppe learned to speak, read and write in English, and developed a strong interest in finance and real estate, which became an eventual second career. A strong value that he passed to his children and grandchildren in that education was the ticket to living the "Canadian dream".
His relationships with each of his children and grandchildren were unique; he loved to tell stories about his life, almost always learning a fascinating new detail each time. Giuseppe always encouraged education to his children and grandchildren and the importance of secondary education, he was very proud of his children's and grandchildren's accomplishments.
In November, Giuseppe celebrated his 90th birthday with his entire family, and friends that he met when he moved to Lindenwood Terrace in 2014.
Funeral service and burial will take place at Glen Eden Funeral Home, 4477 Main Street on Saturday, October 12, 2019 at 9:00 a.m. for viewing and 10:00 a.m. service, which will be led by Father Sam Argenziano and burial to follow.
The family would like to thank Pembina Place Personnel Care Home for their caring and compassion during our dad and nonno's final weeks.
In lieu of flowers, donations can be made to the Heart & Stroke Foundation of Manitoba.

Riposa in Pace, Dad and Nonno.