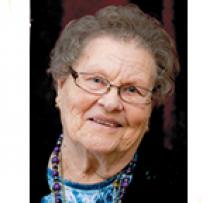 It is with great sadness that we announce the sudden, yet peaceful passing of Anne on October 4, 2019, at the age of 92.
Anne was preceded in death by her husband of 52 years, Walter, who passed January 3, 2000.
She is survived by her daughters: Alexis (Dave), Wanda (Wally), Toivi (Russ); grandchildren: Sherri (Jim), Stewart, Sara (Lucas), Morgan (Cory), Shanna (Trevor), Holly (Ryan); and her great-grandchildren: Alexandra, Alissa, Danica, Elton, and Moses.
Anne (Liisi Maria Annikki Mustajarvi) was born in Evijärvi, Finland, moving to Canada with her family in 1928. She grew up primarily in Ontario, spending most of her youth in Sault Ste. Marie. While working at a logging camp she fell in love with a young man from Kamsack, SK, Walter Konkin; they were married in 1947. They moved back to Kamsack and had their first daughter, Alexis, the same year. After Wanda was born two years later, they made their way to the Winnipeg area and had their third daughter, Toivi, in 1955, settling on a farm near Oakbank, MB in 1962.
Anne maintained her Scandinavian roots throughout her life, even returning to Finland for her 80th birthday to reconnect with family, but in Canada, she truly embraced life on the farm and her husband's Russian family influences. She was a strong woman and a hard worker in everything she did. She loved bingo, casinos, and card games…Kamsack Rummy was her favourite. She was talented at baking and knitting and loved the outdoors, whether that was tending to the farm and garden, fishing with Walter or spending time in the woods at "The Land." But perhaps, what she loved the most was her family, whom she was very proud of. Our Valentine's Sweetheart was an incredible matriarch to her family and she will be greatly missed.
Sisu, a Finnish word meaning stoic determination, tenacity of purpose, grit, bravery, resilience and hardiness, perfectly defines our mother and Grannie.
The family would like to thank the staff at Park Manor Care Home for their loving care of Anne.
Cremation has taken place. There will be no formal funeral, just a small family gathering at a later date.