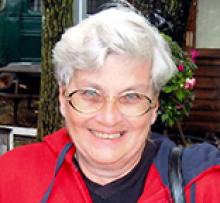 With heavy hearts and great sadness, we announce that Dolores Piush passed away suddenly, at her home, at the age of 75.
Dolores is survived by her husband Ron, of 52 years; son Jeff; daughter-in-law Candice; granddaughters, Chelsea and Ava; sister Levett; twin sister Eleanor; sisters-in-law, Nadine (Nick), Evelyn, and many nieces, nephews and friends. Dolores was predeceased by her parents, Michael and Emily Pensak, and by her brothers-in-law, Roman Manastersky and Adam Tabacki, as well as many other relatives.
Dolores was more affectionately known to her friends as Dolly. There is nothing she enjoyed more than spending time with her family and friends, especially her granddaughters. No matter what she was doing, she often found the time to catch both of her granddaughters soccer games or play a board game with them.
Dolores worked for the City of Winnipeg before retiring. After retiring, Dolly and Ron spent most of their summers at Tarryall Resort where she mastered the art of fishing. She never turned down an opportunity to drop a line in and always seem to catch the first fish.

Family and Friends will cherish her
memory forever. - never forgotten

Friends and relatives are encouraged to share in a photo-tribute, eulogy, stories and condolences for the family by visiting Dolores's memorial page at IntegrityFuneralPlanning.com
If desired, donations can be made, in Dolores's name, to the Winnipeg Humane Society or any animal shelter of choice.
As per Nadia's request, a private celebration of life was held.