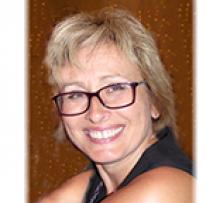 On September 18, 2019, Delmarie McMillan of Swan River, passed away at the age of 57 years.
She is survived by her loving husband Bruce, and son Kyle (Alexandria Jones) of Canmore, AB; her mother, Elaine Blair of Swan River; sisters, Wynne Kerr (Ron) of Calgary, AB and Sandee Blair (Rod Miller) of Princeton, BC; sister-in-law Mary Tomiak (Ray) of Brandon, MB; brother-in-law Dale Bertram of Kenora, ON and nieces, Samantha Bertram of Melbourne, Australia, Julia Halipchuk (Phil Bartlett) of Vancouver, BC, Rachel Blair of Vancouver, BC and Kaitlyn Kerr of Calgary, AB, and nephews, Michael Tomiak (Melanie, Jett) of Edson, AB, Jeffrey Tomiak of Chestermere, AB, and Jesse Bertram of Whistler, BC.
She was predeceased by her sister Johnna Bertram in 2017, and her doting father John (Jack) Blair in 2018.
Delmarie Blair was born at the St. Boniface Hospital on May 11, 1962. She was the third daughter of four of Jack and Elaine Blair. Delmarie attended school in Minitonas and Swan River, MB. She graduated from the University of Winnipeg in 1985 with a Bachelor of Education degree.
She began her teaching career in Kelwood School from 1985 to 1989. After moving to Swan River in 1990, she spent her next 29 years of teaching at Minitonas Elementary School and Taylor School. She was a valued member of many local education committees throughout her career. Her professional career was highlighted by educating approximately 700 elementary school students. The middle of August was always the start of the school year and she was always in the school early. This is also the main reason she forgot many of their anniversaries.
Delmarie and Bruce were married on August 17, 1985 in Minitonas United Church officiated by Kathy Highmoor. Their son, Kyle James John, was born on October 22, 1990. It was a beautiful fall day and he has blessed them since then.
Delmarie was a voracious reader and always had at least two books on the go. She was willing to try just about anything, as long as it wasn't too strenuous. She enjoyed golfing because she could talk right up to just before she hit the ball.
Delmarie was very connected to the world around her. She loved the smells and sights of autumn; the feel of an ocean breeze and sunshine on her face; the touch of natural fabrics and the feeling of deep contentment when she was with family and friends. Her "emotional tank" was full when she felt all these things.
In 1997 a trip to the Pacific Rim National Park was taken with Sandee, Rod, Julia and Rachel. It was Delmarie's ideas to keep a journal of the trip. This is one of her entries -
"There are no words to express how the ocean made me feel. That first time we walked down to the seashore was a cold, cloudy evening and I thought I would be disappointed. NOT!!
"It was marvellous, stupendous, magnificent and so very, very powerful. The surf was really up, there was a mist everywhere and textures and colours and smells. It was so amazing that I started to walk across this great expanse of sand and was starting to wail because I was so moved."
This was how Delmarie lived her life. She felt everything. Delmarie was a committed and loving wife and parent. She had a devoted group of close friends. She would take comfort that Kyle found a person that has some of the same characteristics and commitments that everyone saw in Delmarie.
A Celebration of Life service will be held from the Swan Valley Museum on Saturday, October 12, 2019 at 2:00 p.m. with Reverend Kathy Highmoor officiating.
Should friends so desire, donations in Delmarie's memory may be made to CancerCare Manitoba or to the Taylor Elementary School PAC, Box 1269, Swan River, MB R0L 1Z0.