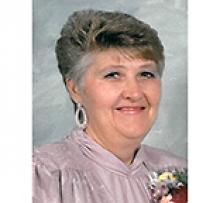 It is with regret and sadness, that we
announce the passing of our mother,
grandmother (Baba), and sister, Phyllis Tillie Jones, on October 6, 2019 at the St. Boniface Hospital.
After a long-fought battle with her health, Phyllis left this earth to meet her saviour and to be reunited with her children, Roger and Tammy; her parents, Olga and John Bakalak; and her former husband William (Bill) Rosko.
She is lovingly remembered by her sons, Douglas and Michael (Anita); son-in-law Brent; and grandchildren, Tara (Paul), Jayson (Stephanie), Maranda (Chris), Braden,
Kelsey, Evan, Jaysey, and Ryan; and three great-grandchildren. Phyllis is also survived by her sisters, Beverly, Linda (Gerry); her brother John Jr. (Linda); honorary siblings, Jackie, Ken, Debra and Roger; and many
nieces, nephews and friends.
Phyllis spent many years working in the hospitality industry as a server/cook in many Winnipeg restaurants. She took these skills into her retirement perfecting Bill's recipe for buckwheat cabbage rolls and perogies. Phyllis was a devoted Winnipeg Blue Bomber fan and grandmother (Baba).
As a journey begins, it ultimately ends. Rest in peace Phyllis (Mom, Baba and
Grandmother), until we meet again.
Thank you to the staff at the St. Boniface Hospital, ICU and 5B wards.
A celebration of Phyllis's life will be held at the Niakwa Country Club, 620 Niakwa Rd. Winnipeg, MB at 11:00 a.m. on Wednesday, October 16, 2019.