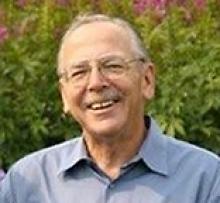 He was much loved by his three sons and their families - John and Alison with grandsons Keith (Chantale) and Neil (Claire); James and Donna with granddaughter Amalia; Glen and Penny with grandson Aaron (Allie and great-grandson Xavier) and granddaughter Lauren (Ethan).

Bill grew up in a large, loving family in Farrington and later Fort Frances, Ontario. His brothers and sisters and their spouses were not only family but his lifelong friends as well. Bill's life will continue to be celebrated by his sisters, Florence, Donna (Willie) and Lois; his brother Frank (Frieda); sisters-in-law Fae and Mabel; as well as numerous beloved nephews and nieces. He was predeceased by wife Elaine; his parents William and Helen; brothers Horace and Ed; and his sisters and brothers-in-law: Irene (Felix), Shirley (Les), and Jessie (Merlin) and Murray, and in-laws Jack and Eleanor Paxton.

Bill was a minister of the United Church of Canada from 1957 and into the 21st century, through what his family joked was a serial pattern of retirements and returns to his calling in the ministry. Following ministries in Bowsman/Minitonas, Manitoba, (1957 - 1962), Thunder Bay, ON (1962 – 1970) and at Riverview United Church in Winnipeg (1970 – 1976), Bill served as Executive Secretary for the Manitoba and NW Conference (1976 – 1985). Bill returned to congregational ministry in 1985 at Immanuel United Church until retiring in 1994. After his retirement he remained an active member of the Immanuel Congregation, finding the fellowship of the men's study group particularly fulfilling. Bill and Elaine took great pleasure in their involvement with the Good Neighbours Active Living Centre and enjoyed the opportunity to sing together in their choir.

Bill was a passionate advocate for those left behind by society. He was an early supporter of rights for LGBTQ people at a time when such a view was unpopular. He worked to build bridges with Canada's Indigenous people and was proud of his role as speaker of the All Native Circle Conference of the United Church of Canada.

The love of Bill's life was his wife Elaine. They were married from 1957 to Elaine's death in 2012. He never stopped missing her and loved her to the end of his days.

In lieu of flowers, please make a donation to the charity of your choice.