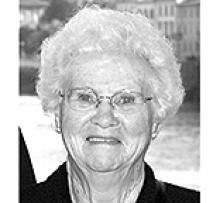 Margaret Henderson, known to friends as "Peggy", passed away peacefully at the Saul and Claribel Simkin Centre, at age 93.
Predeceased by her parents and her husband David.
Survived by her children, Susan Wilding (Terry) of Sault Ste. Marie, David (Lea) of Toronto, and Robin (Rita); five grandchildren, Christopher, Karen, Jennifer, Caitlin and Jocelyn; two great-grandchildren, Jorja and Gabriel; and her brothers, Bill in Florida and Jim in California.
Peggy was born in New York City to Scottish immigrants. Grew up there and in suburban Valley Stream, attending Sewanhaka High School. In the first of many overseas trips she would take in her lifetime, she sailed unaccompanied at age 10 to Scotland to visit family.
In 1944, while volunteering at the Thistle Club in Manhattan she met a young British serviceman, David Henderson, on his way back to England. They corresponded for years by letter. In 1950, after finishing university, David moved to Canada. The next year they married and Peggy left life in the big city for a cabin in northern Quebec. David later found work with Inco, which brought the young family to northern Manitoba in early 1959 - pioneers in what was then the new mining town of Thompson. Peggy's biggest legacy was co-founding the town's library with three other women volunteers. In 1967, the town hired her as its first library administrator, a job she held for nearly 20 years. During those years she and David embarked on a lifetime of travels, usually to Britain and Europe but even as far afield as China.
She retired to Winnipeg in 1986 and for years volunteered with the Children's Hospital Book Market and the IODE. She had an active social life with friends and family and enjoyed the theatre and Folklorama.
The family wishes to extend their deepest thanks to Janet from Comfort Keepers, who became Peggy's best friend in the last two years as she struggled with dementia, and to the staff at Simkin.
A memorial service will be held Saturday, October 19 at 10:00 a.m. at Thomson "In the Park" Funeral Home, 1291 McGillivray Boulevard, reception will follow.
In lieu of flowers, donations in Peggy's memory may be made to the Children's Hospital Foundation of Manitoba.