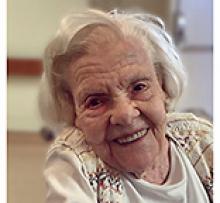 Lillian Nygaard was born May 28, 1918, to Horace and Irene Thomas and grew up on a farm near Sylvania, Saskatchewan. She attended Millford School.
She passed away peacefully on October 13, 2019, at 101 years of age, in Winnipeg, Manitoba.
On January 1, 1943, Lillian married David E. Nygaard, son of William and Annie Nygaard. They had two children; a son, Lyle, and a daughter, Tannis. They farmed in the Sylvania area from 1947 until 1971 when they moved to Tisdale and later Melfort, Saskatchewan.
Mom accepted Christ as her Saviour while in her teens under the ministry of John Parschauer. She faithfully served her Lord, taught Sunday School to neighbourhood children and was involved in The Bible Mailbox Club for many years. Mom enjoyed various Church activities, taking part in Bible studies and helping out wherever she could. She also cooked at Stony Lake Bible Camp for many years.
Mom and Dad were married for 65 years and enjoyed a wonderful life together. In their retirement years they travelled to Arizona, Hawaii, Washington, B.C and Ontario as well as visiting family in Manitoba and Alberta. Dad passed away in 2008 and Mom moved to Winnipeg to be closer to family.
Mom was predeceased by her loving husband Dave; her son Lyle; her parents; her brothers, Robert and Leslie; and her sister Phyllis.
She is survived by her daughter Tannis Money; her daughter-in-law Karen Nygaard; five grandchildren; seventeen great-grandchildren; and two great-great grandchildren.
Thank you to the nurses and caseworkers of Charleswood Care Centre for the compassionate care she received in her final years.