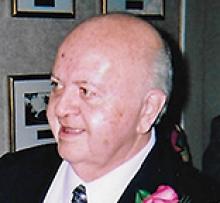 After a short battle with cancer, Don Hunter has sung his last song. Don's memory will be cherished by Yvonne, his wife of 50 years, his daughter Kim (Rob) and son Chris (Lisa).
Always brash and larger than life, Don was a born entertainer. His greatest joy was charming strangers and family alike with a song, an extravagant meal or the tale of one of his many adventures. Although he loved to write poetry and sing, Don didn't care much for school as a young man, preferring instead to race cars and spend time in local bowling alleys (but it paid off, as in 1962 he bowled a perfect game). Don sang in nightclubs around the city while doing a series of jobs from vending machine repairman to bowling instructor to booking agent. It was this gig at Quasimodo that would change Don (and Yvonne's) life forever.
In the mid 1960s Don began booking a local band called the Guess Who and soon became the band's manager. Don toured the world with the guys, partied with celebrities, amassed a wall of awards including RCA's 'Manager of the Year' and even visited the White House when the Guess Who played for the Prince of Wales and Princess Anne. Don's commitment to the band was perhaps best personified by the ad campaign for the song 'Glamour Boy'. Don was photographed bare chested in tights and glam makeup and this poster was featured prominently in Billboard magazine and record store windows (much to Yvonne's chagrin).
When the band broke up, they moved the family to a small farm in Grand Marais. They continued to spend their summers just down the road at the family cottage, 'Hunter's Haven', in Albert Beach where Dad reigned over the BBQ. He'd bust out his cassette player and demos of Scrubbaloe Caine, Gypsy or other Canadian rock legends and suddenly it was a party.
Don loved animals, especially dogs. While on the farm, he and Yvonne bred and showed Basenjis and he made many lifelong friends through the dog show world. This love of dogs led to his next career – working in various sales and marketing roles in the pet supply industry. He often said that rock 'n roll prepared him for a life of working with animals. Don and Yvonne spent more than a decade in Abbotsford, BC, returning to Winnipeg in 2003 so they could be closer to Kim and Chris.
Don was not particularly well suited to retirement – he found a lot of things about getting older boring and frustrating. However, he'd recently discovered that he loved taking cruises with Yvonne, rediscovered photography and became an iPad master. They were planning more adventures when he got sick this summer.
We want to express our most sincere thanks to the staff of 3E at Riverview Health Center for the exceptional care.
In lieu of flowers, please consider making a donation to Riverview Health Centre in Don's name.
Cremation has taken place and a private Celebration of Life will be held later this year.

Rest easy Dad. We love you.


Friends and relatives are encouraged to share in a photo tribute, stories and
condolences for the family by visiting Don's memorial page at