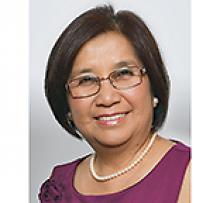 Bernadette, at age 70, peacefully joined her Lord and Saviour on October 14, 2019, surrounded by the love of her family in Winnipeg, Manitoba.
Bernadette was born on August 3, 1949 in Manila, Philippines and was the eldest of four children. Raised during the postwar reconstruction period, Bernadette strived to secure a bright future for herself. She was pursuing a career in the medical field when a minor accident in the university chemistry lab altered the course of her studies towards education, which became her lifelong profession. She studied at Philippine Normal College and graduated Cum Laude in 1970 with a degree in Bachelor of Science in Elementary Education. This achievement launched her career as an educator and gained her teaching employment. While working as a teacher at St. Jude Catholic School, she completed the academic requirements for a Master's Degree in English as a Second Language at The National Teachers College in Manila. She moved to the City Schools of Manila where she gained a scholarship to pursue further studies and earned another Master's Degree in Administration and Supervision at the Technological University of the Philippines. All this she did while she held the responsibilities of a loving wife, a doting mother, and a passionate teacher. Bernadette worked as a classroom teacher to expand her professional experience throughout her teaching career in her quest for academic excellence. Bernadette's hard work and dedication landed her jobs at De La Salle University on Taft Avenue, one of the most prestigious universities in the Philippines, and at the Technological University of the Philippines where she concurrently taught Technical English for engineers until she moved to Canada.
In 1996, Bernadette along with her husband Flaviano Agpalza Jr. and their four children moved to Winnipeg, Canada to join the Agpalza Clan and to build a brighter future for their family. Bernadette continued her teaching career in Winnipeg, entering Winnipeg School Division as a substitute teacher then landing a permanent position at William Whyte School. For many years, she taught English as a Second Language for Seniors in a multicultural setting under the Settlement Program of the Department of Labour and Immigration in Manitoba. She was also an active member in the Filipino community and served as the President of the Manitoba Association of Filipino Teachers Inc. for two years. Bernadette committed the remainder of her time at Grant Park High School where she was a teacher of newcomer students learning English as an Additional Language. It was there that Bernadette dedicated her passion and lived out the rest of her teaching career of 50 years.
Bernadette's deep relationship with God enabled her to establish a strong foundation for her family. It was her strong Christian faith that helped shape who she was: selfless, generous, patient, gentle, and loving. She put her family first yet helped many in need. She was funny, intelligent, and knew the exact words to share. She was a fierce prayer warrior and protected those whom she loved – her husband, her children and their spouses, and her grandsons.
Bernadette is survived by the love of her life, Flaviano Agpalza Jr., married for 47 years; her four children, Flaviano Agpalza III (Cristina), Bernaleene Rufo (Val), Emmanuel Agpalza (Ginnie), and Jennifer Generao (Johann). She will be lovingly remembered by her grandsons, Enzo Miguel Agpalza, Solomon Nemo Generao, and Rufie the dog.
Bernadette also leaves behind her siblings, Bing Jingco (Boy) in San Francisco, Jun Concepcion (Regie) in Los Angeles, Madel Samaniego (Robert) in Winnipeg; her nephews and nieces, Hebe Jingco (Mobette) in Martinez, California, Jey-Ar Crump in LA, Denisse Samaniego, and Danielle Samaniego; her great-nieces, Jasmine Eve Jingco in the Philippines, Jhona Jingco and Jobette Jingco in Martinez, CA. She will be lovingly missed by Fe Moratalla and leaves behind the entire Agpalza family who has provided incredible support and love for Bernadette.
Bernadette was predeceased by her parents, Alfonso and Josefina Concepcion, and her nephew Jhon-Jhon Jingco.
Lamay (viewing) will be held Friday, October 25, 2019, from 6:00 p.m. to 10:30 p.m. at Glen Eden Funeral Home & Cemetery, 4477 Main Street, West St. Paul near Winnipeg. Funeral service will be at 10:30 a.m., Saturday, October 26, 2019, at Glen Eden and interment to follow.