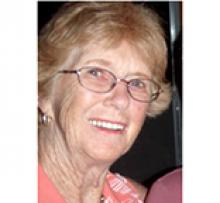 
Doreen passed away peacefully after lengthy health issues.
She is survived by her three children, Robert (Jo Phelan), Tannys (Ron Duplack) and Margot, as well as grandchildren, Pilar, Stephen, Andrew, Marielle and Riley, and was predeceased by her loving husband of 61 years, Bill (William Stenton) Langdon, and sisters, Vivian (George Fowler), Vera (Tommy Neilson) and Cynthia (Bill Scurfield). Doreen was well loved by family and her many friends.
Born in Shoal Lake, she moved to Winnipeg where she met the fun-loving Bill, got a Bachelor of Sciences (HumEc) at U of M and was president of Zeta Tau Alpha, as well as Most Bewitching Miss of 1950. After Bill and Doreen's wedding during the 1950 Winnipeg flood, they moved to their family home of 60 years in Fort Garry - where they made lifelong friends on Fletcher Crescent and through the Wildwood Club. She later became very involved in the women's pharmacy auxiliary, including as president. Doreen taught HomeEc and later ESL and went back to U of M for her education certificate in 1965, retiring in 1986 from Churchill High School, where she was a founding member of the "Wild Wimmin".
Doreen and Bill spent almost 30 happy winters in Weslaco, TX, with many old and new friends, remaining active dancing, playing golf and socializing. Doreen's hobbies included golf, bridge, wine-making, painting, badminton, cooking, entertaining, dancing, swimming, reading, singing, sewing, arts and crafts and travelling. Through teaching and budgeting, Mom bought a cottage at Victoria Beach in 1966, which continues to be central to the whole family. She was editor of the Victoria Beach Herald for many years and loved to golf every morning with her golf girls, usually followed by a coffee party at someone's cottage.
After suffering a stroke in 2013, Doreen moved to Sterling House, which was her very happy second home. Doreen enjoyed fun but had great wisdom and common sense, and was independent, confident and creative, with a powerful optimism, grounded in reality. Her family and friends were of the greatest value to her. The family wishes to thank the caring staff of Sterling House and the Victoria Hospital, as well as her companions from Home Care Assistance, who supported Mom like family. The friends and family who brightened up her last months with visits are especially appreciated.
A service will be held at Thomson "In the Park" on Saturday, October 26, at 3:00 p.m., with a Celebration of Life to follow onsite. Obituary may also be viewed, and condolences may be sent to www.thomsoninthepark.com.