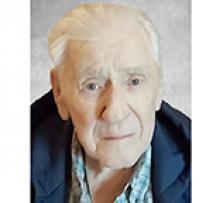 
It is with heavy hearts that we announce the passing of our father, Ben, just 40 days before his 90th birthday, on Friday, October 18, 2019, at Grace Hospice, Winnipeg, MB.
He is survived by his daughters and their partners: Susan Hryb, Connie Paley (Lorne), Judy Kamke (Richard Toposzkiewicz), Debra Stelzer (Dave), Lorraine Kamke (Heinz Braun); and dear daughter-in-law Alice Kamke Lazaruk (Mike); his grandchildren and their partners: Jennifer Levreault (Jason), Rachel Pritchard (Allen), Melissa Hryb (Jason), Kyla Paul (Trevor), Shaun McLean, Scott Ogonoski (Jennifer), Matthew Ogonoski (Lindsay), Ryan Stelzer (Kate), Kyle Stelzer (Laura), Amber Brajczuk (Dale) and Jordan Kamke (Amber); and his great-grandchildren: Liam and Ava, Nicholas and Addison, Stevie, Tucker, Scarlett, Chloe and the expected arrival of twins in January 2020.
Ben was predeceased by his wife Helen; son Richard; son-in-law Steve; granddaughter Kimberly; his parents, Emmanuel and Emma; all his siblings: Art, Linda (Tommy), Arnold, Alma, Harold, Victor (Emilie), Lawrence (Norma) and Clarence (Sandra); his father and mother-in-law, Alex and Ann Pruden; as well as all his brothers and sisters-in-law: Mary (Walter), John (Caroline) and Greg.
Dad was born in Libau, MB and grew up on the family farm where he learned about the value of hard work and the good life that a farm provided for raising a family. In the early 1950s he worked in a bush camp in Ontario with some of his brothers and friends. What stories he could tell of those days!
He married our wonderful mother, Helen, in 1952 and they began the process of raising their six children born from 1953 to 1961. He was the love of her life and together they built a life that was very hard at times but rewarding most of the time. They lived in Winnipeg in several spots, the last being a house in Brooklands, until in 1961 he moved our family back to the farm, feeling that it would afford us a better life. Dad farmed and continued to work a job. Ben loved his farm. Planting seeds and watching them grow gave him a great sense of fulfillment.
Over the years he worked as: a milkman for Silverwoods, a Coke delivery man, a labourer/crane operator at Dominion Bridge, a labourer at Manitoba Rolling Mills, a sewer tunneler for Nelson River Construction, a manufacturing machine repairman for Shefferin Brothers and as an auto mechanic at "The Corner" for Ray and Bea Gilson and numerous other owners, finally retiring after working in Grand Marais for Don Schmidt.
Family meant everything to Dad. "Farm Suppers" on Sunday, time spent around the barbecue with the guys, bouncing his grandchildren and then great-grandchildren on his knees or chasing them on his hands and knees as long as he was able. Family gatherings and parties to celebrate most anything put a smile on his face and a sparkle in his eyes. He had a kind and generous heart and would help anyone. He had the gift of being able to fix most anything and had an incredible amount of knowledge on almost everything that he was always willing to share. He was frequently missing from home because he was off doing repairs for others.
Life gave him many challenges which he faced head on with faith, strength and courage, especially when it came to the loss of family, friends and his health. Even in his last few months, as his health declined, when asked how he was, he always replied 'not too bad.' His sense of humour remained right until his last day here on earth, as he was telling corny jokes to his nurses. Even though he will be sorely missed we know it's for the best and now "the last man standing" has gone to his Heavenly home and is reunited with all our family.
Cremation has taken place and a service to celebrate Ben's life will be held on Tuesday, October 29, 2019, at 10:30 a.m. at Good Shepherd Lutheran Church, 106 Sawchuk Drive, Selkirk, MB with interment following at St. James Anglican Church Cemetery, Poplar Park, MB.
In lieu of flowers, donations in memory of Bernard may be made to Grace Hospice.