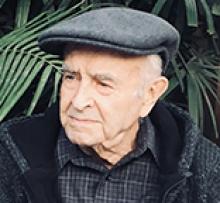 
With family by his side on October 17, 2019, James Morice Bannatyne passed away peacefully at the Seven Oaks Hospital.
Jim will be lovingly remembered by his children, Grant (Angie) (Travis, Kristine and Zak); Cliff (Jackie) (Garrett and Kira); Scott (Jacqueline) (Courtney and Tyson); Gail (Lyall); brothers, Herb, Grant and Ross; sisters, Sheila and Nancy.
Jim was predeceased by his wife Mary; parents, Morice and Lena Bannatyne; brothers, Bob and Bruce; and sister Donna.
Dad/Grampa was born and raised in Charleswood on the family farm where his strong work ethic was instilled in him. Dad eventually built his own house just around the corner on Community Row and moved his family there in 1961 where he lived right up until his passing. Dad was a hard worker and left home at the age of 17 and headed west where he would find employment building grain elevators in Saskatchewan and Alberta. He came home to Charleswood and worked at Yager Builders and Gus's Garage before earning his ticket as a diesel mechanic and going on to work for 35 years at C.P. Express before retiring. He had a large garden he loved to tend and this would produce some trophy sized vegetables with one pumpkin weighing 262 lbs.
Grampa's love for his grandchildren was undeniable. He attended hockey, baseball, soccer games and also found time to go watch horse riding lessons. Grampa loved his grandkids and the same for his grand-dogs. We all knew to bring our dogs along when visiting Dad as he really enjoyed his pooches. Sitting in his rocking chair on the patio or in the shade of his garage was where you would find him when visiting. His face would light up and you were greeted with a friendly smile and if the grandchildren were along, well you would have thought he won the lottery.
It is impossible to describe what Dad meant to his family and his generous nature and love for us. Dad was a truly humble man who would help anyone out in need, and his positive impact on all those he leaves behind will cherish his memory.
The family would like to thank the nurses, staff and doctors of the third floor of the Seven Oaks Hospital.
A celebration of his life will take place on Friday, November 1 at 2:00 p.m. in the Charleswood United Church Hall, 4820 Roblin Boulevard, Winnipeg, MB.
In lieu of flowers, donations can be made to the Winnipeg Humane Society in memory of James Bannatyne.

Condolences may be left
on his tribute wall at
www.gilbartfuneralhome.com