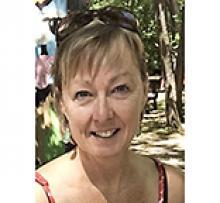 It is with immense sadness we announce the sudden passing of Julie Dawn Nielsen (nee Roberts), on Tuesday, October 15, 2019, our beloved daughter, wife, mother, nan, sister, cousin and friend.
She is survived by her husband Robert; children, Alexander (Jessica) and Ashley; mother Christine; brother Mark (Louise); her inspiration and her greatest joy and strength, her grandchildren: Abbigail, Jace, Rayne, Easton; and many more family and friends.
She was predeceased by her grandparents Jim and Rita Roberts, Irene and Alexander Sinclair; father Peter Roberts; and aunts, Sheila Zarillo and Carol Deugau.
The memorial service will be held on Friday, November 1, 2019 at 2:00 p.m. at Birchwood Funeral Chapel, 162 PTH 52 W., Steinbach, MB.
In lieu of flowers, donations can be made in memory of Julie, to CancerCare Manitoba Foundation or to the Jewish National Fund, as a fund has been established in honour of Julie.
A special thanks goes out to all the nurses and doctors at CancerCare in Steinbach, MB and at the Health Sciences Centre, Winnipeg, MB.