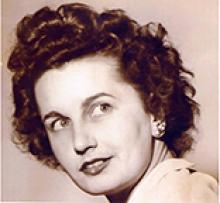 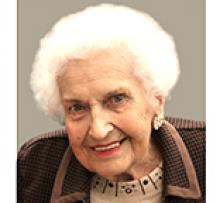 
It is with great sadness that her family announces Julie's passing, on October 17, 2019 at Riverview Health Centre in Winnipeg.
Julie was predeceased by her husband Frank; her parents, Lena and Fred; her sister Ann; and her granddaughter Tristyn. Julie is survived by her children, Denise (Brian) Murphy, Bob (Debbie) Ledoux, Gary (Karin) Ledoux and Gloria (Campbell) Yates; her grandchildren, Chris (Andrea Thorgilsson), Erin (Mike Hall) and Tim Murphy, Jaylene, Cory (Sarah Bowles) and Robyn (Eric Mourre) Ledoux, Justin Ledoux and Cody, Kali and Quinn Yates; her great-grandchildren, Austin and Hannah (Nate Meeks) Jellis; and Sophie Ledoux and her great-great-grandson Red Meeks.
Julie was born in 1922 at the Winnipeg General Hospital and lived in the north end of the city where she attended Sir Isaac Newton School and Sisler High School. In 1942, her family moved from Pritchard Avenue to Riverview where her father had built a house on Baltimore Road.
After graduating from Success Business College, Julie worked in various positions for the Department of National Defense during the time of the Second World War. At the end of the war, she was working for Public Relations at Fort Osborne Barracks where she met a dashing young army officer, Captain Frank J. Ledoux. Julie and Frank were married on September 8, 1949. Thus began an adventurous two decades, which saw them posted to nine different cities between Vancouver Island and Halifax. As the family grew during that time to include four children, Julie became quite adept at managing the logistics involved in arranging moves, setting up a household and attending to the needs of young children. Their last posting was in 1967 to Winnipeg.
Julie returned to the workforce in 1968. She worked briefly with the provincial Department of Education before joining the federal civil service in 1969. She worked for the Departments of Transport, Public Works and Indian and Northern Affairs before retiring in 1985.
Throughout her entire life, nothing was more important to Julie than her family. She and her parents were very close and her sister Ann was her best friend. As the "go-to" babysitter, she took great delight in creating many precious memories together with her grandchildren. She very much enjoyed accompanying her children and grandchildren on trips to places exotic (Hawaii and Disneyworld) and mundane (shopping trips to Grand Forks and Fargo). Julie also treasured her many visits with family on Vancouver Island and summer vacations spent at Grand Beach throughout many decades. Julie found great pleasure in all family events, especially birthdays and holiday celebrations. She was a fabulous cook and the family always savoured her culinary delights. To the end of her days, she cherished visits with her children, her grandchildren and her great-grandchildren. Visits from baby Sophie always put a special twinkle in her eye.
As her family, we are incredibly grateful for all that Mom/Grandma has done for us throughout these many years. She was generous, encouraging, supportive and had immeasurable love to give. We will miss her immensely, treasure the legacy of wonderful memories and love her forever.
The family would like to extend profound thanks to the staff at 3West Riverview for their exceptional care, comfort and compassion during Julie's last years, especially Barb, Rona and Janelle.
If you so choose, donations may be made to the charity of your choice in Julie's name.
Cremation has taken place. A Celebration of Life is being planned for a later date.

IN OUR HEARTS
FOREVER LOVED