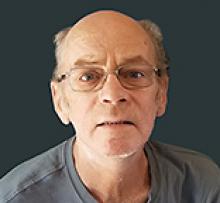 
Warrant Officer Robert (Bob) William Moug passed away October 24, 2019, after a courageous battle with cancer.
Bob was born in Winnipeg on September 18, 1953 and grew up in St. James and Charleswood. Out of high school Bob entered the Canadian Armed Forces. That decision turned out to be a lifelong career of 40 plus years in service, filled with many national and foreign postings. Training was in CFB Cornwallis in Nova Scotia followed by Canadian postings including Winnipeg, Calgary, Barrie, Kingston and Montreal. Bob moved quickly through the ranks into intelligence and later logistics serving in many foreign postings including Cyprus, Baden-Soellingen Germany, Brussels, Croatia and Abu Dhabi. Even upon retirement Bob was called upon to assist in reserve training in Edmonton and other Canadian bases.
Warrant Officer Bob Moug was predeceased by his mother Margaret Moug (Harries) in 1973 and father James Moug in 1983. He is survived by his siblings, Linda, Michael (Doreen), Gordon and David; nieces, Diane, Karen, and Hailey; and nephew John.
Bob devoted his life to serving Canada and moved frequently. In 2002, he chose to complete his Canadian Armed Forces professional career in Winnipeg, the city he called home. In retirement, Bob could often be found at a golf course serving as chairman of the Canadian Forces Base Winnipeg 17 Wing Golf Club and then working at John Bloomberg golf course.
He will be missed by family and many longtime friends. In particular, Bob appreciated the care and compassion of his cousins, Patricia, Janet and Brenna. His brother Dave was with him, providing comfort right up to Bob's passing.
The family would like to thank the staff at the Health Sciences Centre for their care and support.
Our family would like to express thanks to Patty Nesbitt, Janet Adam, and Brenna Raemer for their care in Roberts' illness.
In lieu of flowers, donations in Bob's name can be made to CancerCare Manitoba.
A memorial service will be held on Friday, November 1, 2019 at 2:00 p.m. at Thomson "In the Park" Funeral Home, 1291 McGillivray Boulevard.

Condolences may be sent to www.thomsoninthepark.com