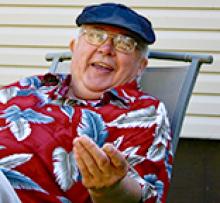 The world lost a sparkling spirit on October 30, when Reg Pendgracs passed away.
Anyone who knew Reg for a long period of time was likely the recipient of his "kibitzing" and jokes. Reg loved to laugh, but even more, he loved to make other people laugh and feel good.
Reg was born in Bowsman, MB, the only child of Edythe (Peggy) Van Kleek and John Pendgracs. He spent several childhood years in Woodrow, SK, and throughout his life immediately warmed to anyone he met who also had Saskatchewan roots.
Reg married Lil Elwood in the 1950s and they had two daughters, Debbi and Sharon. Debbi and Dale White had two daughters, Marika and Kyra. Sharon and Jeff Muirhead had two sons, Brendan and Liam, all of Winnipeg. Reg always enjoyed family gatherings and wished there were more of them.
In 1990, Reg began his relationship with Doreen (von Thuelen/Herneshen) and the two married in 1995, enjoying 12 years together on an acreage near Birds Hill Park, followed by 12 years in Matlock. When Reg was diagnosed with vascular dementia, he moved to the Gimli Betel Personal Care Home, where he lived from May, 2018, until his passing.
Prior to his ill health, Reg and Doreen took many trips abroad, where Reg would befriend nearly everyone he spoke with. He loved to dance, golf, ride motorcycles and snowmobile. He enjoyed music and social gatherings of all kinds - especially time with his best friend Horace Paulmark.
Reg spent the majority of his working life in the insurance industry, making a name for himself as the Corporate Columbo of Manitoba Public Insurance, where he worked as a claims investigator for 22 years, saving the corporation millions of dollars fighting claims against arson, embezzlement and fraud.
Suffering from a fall that broke his hip, Reg developed complications and succumbed to a peaceful passing exactly two weeks following hip surgery at Grace Hospital. The family would like to thank the staff at Gimli Hospital for the incredible care Reg was given during the final week of his life. And heartfelt thanks to the entire staff at Gimli Betel Home, with extra special thanks to Gina, Glynnis and Melissa for always taking time to be kind and caring.
Thanks also to Dr. Jeff Wiebe of Kin Place in Oakbank who gave Reg incredible care for many years before he moved to Gimli Betel Home.
It was Reg's wish that there be no formal service. An informal Celebration of Life will be held for family and close friends at a later date.
Thanks to Seasons Funeral Service in Oakbank for taking care of the final arrangements.