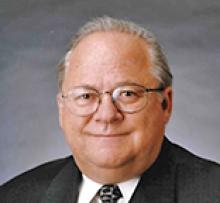 It is with sadness and gratitude that we announce the passing of Theodore Ivan (Ted) Bartman, beloved husband, father, grandfather and friend, on Sunday, October 27, 2019, while surrounded by his family.
Ted is survived by his wife June; children, Jenifer and Tim (Dulce); grandchildren, Sydney and Matthew; and brother Eugene; he was predeceased by his parents and sister, Patricia.
Ted was born to Maria and John Bartman on March 25, 1940 in Edmonton, AB. The family moved to the North End of Winnipeg where Ted was raised. He attended Sisler High School, where he and June first met, and they were married on August 24, 1963. He graduated as Senior Stick from the University of Manitoba School of Pharmacy in 1963. Ted opted for a less conventional career path, including pharmacy positions in hospitals that led to recognition of his management ability and interest. He went on to play a pivotal role at Misericordia General Hospital, including as Medical Director, Assistant Executive Director, Executive Director, and President and Chief Executive Officer. During his tenure, he was responsible for the achievement of many lasting accomplishments that helped to shape and improve the healthcare industry.
Ted was a generous volunteer and governance leader, including as President of the Canadian Hospital Association, The Manitoba Club, Director at Manitoba Blue Cross, and many others. Ted loved the Winnipeg Blue Bombers and began volunteering with the organization in 1980. Having served as a director and Executive Committee member in various capacities, he eventually became president of the Winnipeg Football Club in 1990 to 1991, during which time the team won their most recent Grey Cup. He was understandably proud of a number of related accomplishments, including his name on the Grey Cup, three Grey Cup rings, a CFL Commissioner's Award, and induction into the Winnipeg Football Club Hall of Fame in 2011, but was even more humbled. In 1991, when Winnipeg hosted its first Grey Cup game, he led the initiative of the host city taking responsibility for selling the game tickets, commencing a CFL championship tradition.
Ted was a unique person; widely respected as a results-oriented executive, a guiding mentor to many and a caring friend, all while investing significantly in his family. To say that he had high standards was an understatement; if something was worth doing, it should be done well, and his encouragement to shoot for the stars and "run with the big dogs" was more significant than he knew. An independent thinker who valued principles over what was convenient, we are grateful to have learned many valuable life lessons from him. Ted was a doting grandfather, sharing fun times, stories, songs, and guidance (the songs were no accident, given his time as a member of the Starlites musical group in his younger years). An avid sports fan, Ted followed his favourite teams with enthusiasm, a passion he passed on to his family. He loved to travel, most frequently with June, and we are fortunate that he also viewed these trips as great learning opportunities for his children.
The family would like to thank the staff at Grace Hospice for their care and compassion. At Ted's wishes, a family service has been held.
Donations in Ted's memory can be made to Grace Hospice or a charity of your choice. You can also remember Ted in simple ways; be kind, help a friend, colleague, or an organization in need, or have a vanilla milkshake. He would like that.


It is with sadness and gratitude that we announce the passing of Theodore Ivan (Ted) Bartman, beloved husband, father, grandfather, and friend, on Sunday, October 27, 2019.
A longer notice to follow.