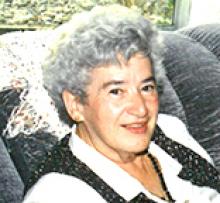 Coreen May Terrio, 88, of Winnipeg, MB quietly passed away on October 26, 2019 at home. Coreen was born May 13, 1931 in Selkirk, MB, the daughter of James Hamilton Shand and Eleanora Florence Shand (nee Mayo).
At a young age, her family moved to Pointe du Bois, MB. She attended John G. Glassco School. After graduating high school, Coreen moved to Winnipeg where she worked for Investors Group for many years. Coreen met her future husband Thomas in Winnipeg. They married on October 24, 1964. Coreen was active in the community. She was a member of the Rebekah's Lodge and devoted much of her time to the Anglican Church, helping with rummage sales, fundraising, sewing for the choir and anything else that was asked of her. A loving and devoted mother, she was involved with her children's school activities, from baking cookies for the classroom to fundraising events. Throughout the years, she volunteered with CancerCare. Coreen sold Avon for well over 30 years, receiving numerous awards for sales achievements. She was consistently a member of the President's Club. Many of her customers became close, lifelong friends. In her spare time, Coreen enjoyed sewing and baking. In later years, spending more time at home, the antics of her cats gave her many "tails" to share with her family and friends.
Coreen is survived by her daughter Marion and son Cliff, both of Winnipeg, a granddaughter, as well as numerous nieces and nephews.
She is preceded by her husband Thomas Charles; four brothers, George, Jim, Clifford, and Charles; and sister Carrie.
Cremation has taken place. Funeral service will be held in Bardal Funeral Chapel, 843 Sherbrook Street, Winnipeg on November 7, 2019 at 11:00 a.m., the Reverend Deacon Val Christopherson presiding.
In lieu of flowers, donations may be made to CancerCare Manitoba, the Winnipeg Humane Society or your local pet shelter.
The family wishes to extend their gratitude to Coreen's family doctor, Dr. Dueck of Oakbank, MB and her home caregivers.
Coreen freely gave of herself, never asking for anything in return. Her love, kindness and never-ending generosity will be deeply missed by all whose lives were touched by her.