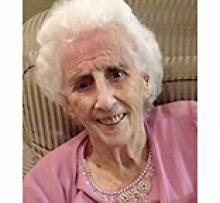 
Bernice died peacefully at Golden Links Lodge on October 30, at the age of 97.
She was the daughter of Ernest and Lily Smith and was raised with her six siblings on Kilbride Avenue in West Kildonan. As a young adult, she worked for Eaton's mail order department. She met her future husband, Dick Sheppard, during the Second World War while he was training in Canada with the Royal Air Force. They married on September 27, 1947 at Holy Trinity Church in Winnipeg. They eventually settled in East Kildonan on Oakview Avenue, where they raised their daughters, Carol and Donna.
Bernice was very involved with the West Kildonan Legion Five Pin Bowling League, where she served as secretary-treasurer for many years. She was known for always having a supply of home baked goods on hand to share with family and friends, as well as creating and decorating birthday and wedding cakes for many people. She was also interested in sewing and needlework.
Bernice and Dick enjoyed several trips to Hawaii and England, as well as throughout Canada and the U.S.A.
Bernice will be lovingly remembered by her daughters, Carol Hildebrand (Garry) of Winnipeg and Donna Sheppard (Brian Dewan) of Vancouver; her beloved granddaughters, Karin Smith (Paul) of Melbourne, Australia and Krista Siemens (Ian) of Winnipeg; and great-grandchildren, Ethan and Scarlett Smith and Lucy Siemens. She is also survived by her nephew, Gerald (Michigan); and nieces, Linda (Michigan), Deanna (Salmon Arm) and Sandra (Winnipeg), and their families, as well as extended family in Canada and the U.K.
Predeceased by her husband, Donald J. Sheppard in 2007; parents, Ernest and Lily Smith; siblings, Ernest, Freddie, Edna, Audrey, Reg and Richard and their spouses; nephew Glen; and niece Debra.
Cremation has taken place and a private family interment will be held.
The family would like to thank the staff of Dakota House, Harmony Court, Golden Links Lodge, and the St. Vital and Fort Garry home care departments for taking such good care of Mom.
If desired, donations in memory of Bernice may be made to a charity of your choice.