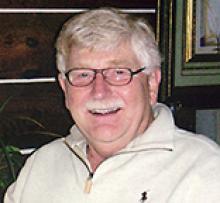 Fier took his final checkered flag on Friday, October 25, 2019.
Fier's legacy lives on through his son Duncan (Angie), stepsons, Brett and Darryl (Julianna and grandchildren, Kellen and Piper). He leaves his brother Ton and cousin Tineke in the Netherlands, and nephew Bob in Houston.
Fier emigrated from the Netherlands in 1970 in search of adventure that new opportunities bring. Fier's mechanical aptitude and business acumen facilitated his rise at Cars International. He used this experience to create Continental Car Services, and then acquire Gary's Auto Service and Body Shop, which became World Auto. Fier grew World Auto and facilitated the acquisition of Talon Lumber.
This work ethic, sound business acumen and a desire to give back prompted Fier to run for a board position for the Holy Spirit Credit Union. He was elected by the members to the board in 2002, a position he held ever since. During his time on the board Fier made many contributions, including participating on sub committees and also in the roles of Vice-President and President. He was on the board during many impactful decisions the organization has faced; including the re-branding from Holy Spirit to Entegra, branch openings, the closure of the legacy Selkirk branch, and most recently the transition to new CEO leadership for the credit union.
Regardless of the business endeavour at hand, Fier always made time for car racing. Fier raced by the belief that "To finish first, first you had to finish!". Throughout his racing career there were setbacks, but Fier, who built the cars he raced, always managed to learn from the adversity. This perseverance led to numerous Championships. Fier would be the first to tell you that his success was due in large part to the team he attracted to help him with these efforts.
As Fier settled into a more relaxed lifestyle, he pursued another passion, golf, at the Niakawa Country Club. As with racing, Fier attempted to compete at as high a level as possible on the course while building lasting friendships in the clubhouse.
The family would like to thank Dr. Joel Gringerich and Cheryl Greaves for their tireless care for Fier. They would also like to thank the staff at Riverview and the palliative care and home care programs.
Fier was an unbelievable role model for his family throughout his life and final days. His tireless work ethic, brilliant guiding principles, and moral compass were second to none. The way he tackled life is something to be admired!
Cremation has taken place.
Should you be so inclined, a donation in Fier's honour would be appreciated by CancerCare Manitoba, 675 McDermot Ave., Winnipeg, MB R3E 0V9.