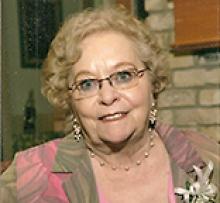 
Norma Kathleen (Gerrand) Minnis passed away peacefully on November 2, 2019 at East Gate Lodge, Beausejour, MB. She was 91 years of age.
Norma was predeceased by her husband Doug; parents, Norman and Winnie Gerrand; and her brother Symington Gerrand. She is survived by her son Bryan and daughter-in-law Cathy Minnis of Beausejour, MB; grandson Brad (Julia and great-grandchildren Taylor and Lauren) Minnis of Oakbank, MB; and granddaughter Kim (Jess and great-grandchildren Logan, Brooklyn and Everette) Minnis of Winnipeg, MB; daughter Kathy and son-in-law Drummond Brown of Winnipeg, MB; grandson Tyler (Mandy) Brown of Winnipeg, MB; and granddaughter Cailey Brown (Jonathan Bauer) of Winnipeg, MB; daughter Debra Proven of Woodstock, ON; granddaughter Kerry (Tim) Pinder of Woodstock, ON; sister Gwenneth (Holland) Berry of Calgary, AB; along with several nephews.
Born in Virden, MB on April 3, 1928, Norma was the oldest of three children and grew up on Sunny Slope Farm, a few miles north of Virden. Norma married Doug Minnis from Bede in 1948 and moved to Melita in 1949 where they raised their three children and developed their close circle of friends. Norma owned and operated the Fashion Centre in Melita from 1974 to 1987. She was a member of the Legion Auxiliary and enjoyed her weekly bridge games with the girls. In 2009 she moved to Beausejour to be closer to family.
The family wishes to thank Dr. Van Rensburg, the nurses and staff of East Gate Lodge, Crocus Unit for their compassionate care for Mom over the past years.
Flowers gratefully declined but if you wish, donations may be made to the East Gate Lodge Recreation Department, Box 1690, Beausejour, MB R0E 0C0.
A private memorial service will be held at a later date to accommodate all family members.