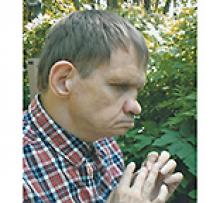 Peacefully on November 1, 2019, Phillip Feniuk passed away at the age of 65 years at the Manitoba Development Centre, where Phillip was cared for since May of 1966.
Phillip was predeceased by his father James Feniuk in October of 1977, mother
Nellie Feniuk in May of 1999 and brother John Feniuk in June of 2009.
Left to mourn his passing are his brother Doug (Darlene) Feniuk, nephew Matthew (Tracy) and their children, Casper and Miles Feniuk, along with family friends, Richard and Carol Gessel.
Doug and Darlene would like to send a heartfelt thank-you to all of the staff at the Manitoba Development Centre.
A Celebration of Life was held on
Wednesday, November 6, 2019 at the Aspen Centre, MDC in Portage la Prairie. Interment followed at Brookside Cemetery, Winnipeg, MB in the family plot.


Messages of condolences can be made
online at www.omegafuneralhome.com