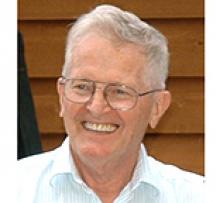 
Nicolass Bessem beloved husband of Janet peacefully passed at Pinawa Hospital.
Nick was born to Herman Bessem and Dorothy (Geiss), the second of six children in Winnipeg, MB, and was predeceased by his parents.
Nick served in the R.C.N. for 26 years and after retiring from the Navy returned to Manitoba where he worked for Boeing Canada for 17 years until his retirement. Nick was a proud active member of the Lions for 43 years, as well as the Anglican Church of Canada and the Legion.
He is mourned by his wife of 55 years, Janet; children, Michel (Linda), Ronald (Tanua), Kirsten (Travis), Sytske (Scott) and Erika (Jeff); grandchildren, Becky, Samantha, Erika, Nicolass, Mathew, Katherine, Grace, Tyler, Jared, Deric, Alexander, Jessica and Brayden, as well as by his siblings, Betty, Pieter, Wilhelmina, Sytske, Hermina and Sylvester, sisters and brothers-in-law, as well as many nieces and nephews.
Family and friends are invited to join us celebrating Nick's life on Saturday, November 16, 2019 at 2:00 p.m. in the Gilbart Funeral Chapel, Selkirk.
In lieu of flowers, donations can be made in Nick's memory to the Lions Eye Bank.
The family wish to thank Dr. Bruneau and the caring staff at Pinawa Hospital for their compassion in his last weeks.