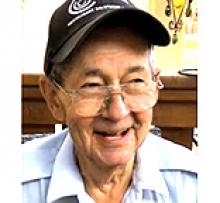 
Joseph Pierre (Peter) Victor Bacon, aged 90, passed away on November 5, 2019. Born to Louis and Henrietta Bacon (nee Amyott) in Ste. Anne, Quebec and raised on his father's farm in Abitibi.
He was predeceased by his wife of 61 years, Jacqueline Bacon (Gingras), and his siblings, Louise, Yvette, Rachel, Denis, Gilles, and is survived by his elder sister, Thérèse Mongrain (95).
Being raised on a farming and logging ranch, Peter rode Big Red to school in the summers, and a dog sled in winter. He became as a Lumberjack, as was his father, at the age of 16. At 21 he became a Forest Ranger for Abitibi County and enjoyed the wilderness from a lookout tower. He spoke fondly of these times, and the friends he made. In 1954, like so many other young men, he enlisted in the Army as part of the Royal Canadian Electrical & Mechanical Engineers (RCEME), again following in the footsteps of his father who fought as foot soldier in the Great War. Peter though was trained as a Field Mechanic. He chose his release in 1960 in Winnipeg to settle down and raise a family. It is there he made his home and worked as a mechanic for various shops: Triangle Auto Supply, Autolec, Piston Ring Services, and Canada Auto in the city until in retirement in 2003. He and his wife were known at various Catholic churches, St. Patrick's, St. Peter's, Holy Rosary and Our Lady of Perpetual Help. After retirement, he became a valuable and daily part of the team at his son, Denis's business, Central Restaurant Equipment Services Inc.
Many of his neighbours and his children will always be grateful for the work he did on their vehicles and appliances and the woodwork that he gave willingly. He was, for many years, the Weston neighbourhood avid gardener and handyman. He taught each child how to play cribbage and Monopoly, made them all fresh cut fries and fudge. He had recently found a group of new friends, joining the card and coffee groups at his new home Manitoba Eastern Star Chalet, Independent Living Centre. He would rarely miss a night handing out sweets and playing cards with these great friends. If you were part of the family, he made sure you knew how to play cards, fish, and swim, ride a bicycle, plant vegetables and use a hammer and nail. These legacies and love of the outdoors have continued on to his grandchildren.
Peter leaves his family, including his son Denis and wife Monique, his daughter Marie Louise and her husband Phillip Totten, his granddaughters, Samantha Lavitt, Elizabeth Lavitt (Tyler), Danielle Lavitt and Victoria Bacon (Taylor) and new great-grandson Kane, his grandsons, Jesse Parrott (Sarah) and Deon Yakiwchuk, as well as numerous relatives, nieces and nephews throughout Quebec
Peter will always be remembered, his gift of life and passing has been celebrated by many that surround him.
In lieu of flowers or gifts, donations may be directed to the Our Lady of Perpetual Help Church, Winnipeg or other charitable organization.