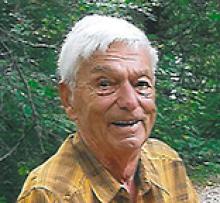 With sadness we announce the death of Jack Crawley on November 2, 2019, with his beloved wife at his side.
Jack is survived by his wife Joyce (nee Edwards), daughter Cathy (David), sons, Doug (Nancy), Rob (Patricia) and Don (Darcy); granddaughters, Jennifer, Emma, Sophie and Maja; brother Ron (Lola Mae), sister Connie, and many nieces, nephews and friends.
He was born and raised in Swan River, Manitoba, leaving to join the Navy in 1942. The friends he made in the Navy remained for a lifetime.
After serving on the Mayflower in the Atlantic and D-Day Invasion, he returned to Winnipeg where he graduated from the University of Manitoba as a professional engineer. He retired after 37 years with Winnipeg Hydro in the position of Assistant General Manager. He was very active in a number of professional organizations. He was particularly proud of his research in alternative energy resources. He volunteered for a variety of organizations such as United Way and Bronx Park Community Centre.
Jack enjoyed his outdoor activities such as sailing, hiking, canoeing, cross-country skiing, golfing and hunting. Jack and Joyce thoroughly enjoyed travelling around North America in their VW van. Their love of travel took them to many other countries.
No public service will be held. We would like to thank Ryan and others for their kind care.