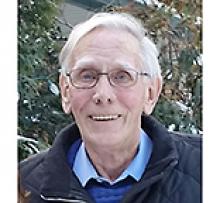 Peacefully, with family right at his side, Stewart Sikkema was welcomed into the safe and loving arms of his heavenly Father on November 6, 2019.
Left behind to cherish his memory is his wife of 62 years, his children, Jenny Sikkema (nee van Steensel); Jane (John) Siepman, Ruth (Jim) Malda, Ron (Christine) Sikkema and Yvonne (Arnold) Kamerman. He also made a lasting impact on his 14 grandchildren, Jenn (Chris), Ryan, Shawn (Katelyn), Kristine, Ben (Aly), James, Rachel, Justin, Tyler, Ben, Luke, Colin, Kyle, Aleah; and four great-grandchildren, Jonathan, David, Jayla and Hope. Stewart was predeceased by his third child, a son named Stewart; as well as his parents, Ruth and Sjoerd Sikkema; and brothers, Romko, Niek and Jan. He is survived by brother Gerrit (Ella) Sikkema; and his sister Tine Romijn Sikkema; as well as two sisters-in-law, Gina and Grai Sikkema.
He was actively involved in his church, serving as elder for many years. He took such joy in ministering to the sick, enjoyed reading (particularly old Dutch sermons and stories related to the war). Stewart and Jenny were a part of the River Heights community as they owned and operated Stewart's Deli.
Dad's presence will be painfully missed as he was our rock, he was so very encouraging, always pointing us to Christ and reminding us where our true help and strength comes from. It is impossible to put into words what he meant to us and how his humble but strong faith shaped us. He had an unwavering confidence of his riches in Christ, it is his legacy left to his children. We feel utterly blessed and overwhelmingly grateful to God for his life and are comforted knowing he is now with Jesus.
In lieu of flowers, donations can be made to (8A) St. Boniface Hospital Palliative Care Unit.
Funeral service will be held on Saturday, November 16, 2019 at 2:00 p.m. at Transcona Christian Reformed Church, 131 Victoria Avenue West.
A private family burial will take place at Green Acres Cemetery prior to the service.