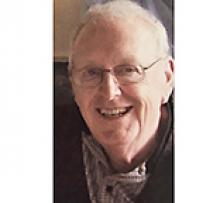 It is with deep sadness that we announce the passing of our beloved husband, father, grandfather and great-grandfather, Oscar Frederick (Fred) Eyolfson, after a lengthy illness, on Monday, November 4, 2019, at the age of 82, at the E.M. Crowe Memorial Hospital in Eriksdale, MB.
Left to cherish his memory is his beloved wife of 60 years Betty; daughter Joanne (Gil); son Bill (Mary); grandchildren, Allyssa, Rachel, Jason (Shari), Tyler (Aimee), Brianne and Jarod; five great-grandchildren; brother Lorne; sister Shirley; brother Bill (Evelyn); sister-in-law Gloria; brothers and sisters-in-law, Helen, Doris, Oluf, Ruby (Joe), Dennis (Wendy), Valerie (Harold), Linda (Rick) and Carol; along with many nieces, nephews and special friends, John and Dot; Joe and Alice; and John and Joy.
He was predeceased by two infant sons; his brother Dave; brothers-in-law, Jim, Sonny, Albert, Clarence and Ed; also sisters-in-law, Janet and Vicky.
Fred was born on October 9, 1937 in Lundar, MB, the fourth child of Oscar and Pauline Eyolfson. Fred grew up in Lundar and had many fond memories of his childhood including playing snooker in his Uncle's pool hall, where he won many trophies, and playing hockey in the outdoor rink. He was especially proud of his days playing hockey. Fred played defense and was part of many winning teams and he was also invited to Winnipeg to try out for the New York Rangers hockey team.
Fred married the love of his life Betty in 1959. He joined the federal government as a radio operator. This job took them to Churchill, Melville and Regina where he became a radio inspector. They also lived in Ottawa where Fred attended Carleton University and completed his Registered Industrial Accountant course, earning the medal for top marks in Industrial Legislation.
The family then moved to Winnipeg where Fred became the Manager of Finance and Administration for D.O.T. After the family moved to Lundar, Fred became the General Manager of the Winnipeg International Airport and retired from the government while in this position. Many years after Fred retired he continued to receive phone calls from previous employees thanking him for his mentorship. Fred and Betty then started a new chapter by starting an accounting business in Lundar which served the surrounding communities for many years. After retiring from this business, Fred started golfing and could often be seen by all early risers as he headed out on the course as the sun was rising. He enjoyed spending his winters with Betty, first in Florida then in Qualicum Beach. At home he was kept busy mowing the lawn, enjoyed spending time with his family and friends, and in the last few years loved and looked forward to his morning coffees at Danielson's Garage and coffee with his brothers on the weekend.
Fred was very knowledgeable in all topics and it was almost impossible to stump him. He enjoyed driving around his property "the land" and appreciating the beauty around him.
The family would like to thank Dr. Kansara and his nurse Christine, the staff of CancerCare Manitoba, E.M. Crowe Memorial Hospital and Lundar Health Clinic for their excellent and compassionate care.
As per Fred's wishes, there will be no service.
In lieu of flowers, if so desired, donations may be made to CancerCare Manitoba Foundation Inc., 675 McDermot Ave., Room ON 1160, Winnipeg, MB R3E 0V9 or to the Pauline Johnson Library, P.O. Box 698, Lundar, MB R0C 1Y0.