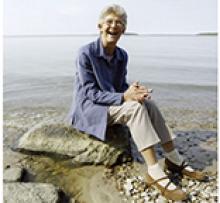 
In memory of Brigitte Aporius, a loving mother, grandmother, aunt, elder sister and loyal friend. Brigitte passed away peacefully after a short but mighty fight with lung cancer on November 7, 2019 in her 76th year.
Arriving in Winnipeg with her husband Gunther on a cold October day in 1967, Brigitte was immediately hesitant and wished to return to her country of origin, Switzerland (Basel). A warming welcome from the Haeger-Buxton family, followed closely by the Bowles at the Government House helped Brigitte adapt to and adopt her new homeland. These two families became her pillars over the years and through to her final days.
Her humbleness kept her from recognizing numerous talents.
How many people can speak three languages, knit anything from a simple scarf to a Disney character, have a freezer full of homemade food or fix a broken object others would discard as garbage?
Her move to River Gardens apartments 20 years ago is where Brigitte really came out of her shell and where her timid nature slowly disappeared. Seeing her friends became a daily ritual. Helping each other out or sharing pictures on her iPad brought her great happiness, as did her annual Christmas village display which grew every year with more buildings, lights, skating ponds and even a ski hill.
Brigitte was a certified home care attendant for over fifteen years and visited many people in need of care. This work provided security but was mostly a daily adventure that nurtured her heart.
Brigitte proudly became a Canadian citizen in 2004.
Her six grandchildren, Amy, Cindy, Daniel, Wellington, Loretta, and Archibald were her most precious treasures. She meticulously created albums and scrap books with pictures of all her visits with them and had every piece of artwork received marked and dated.
Family would like to thank the Emergency Medical Teams and Health Sciences Centre staff for the initial emergency care mom received and the caregivers at Riverview Health Centre (3 West) who did their very best to make her feel at home with kindness and true professionalism.
We'd also like to thank our dear friend Lesley, who became very close to Brigitte over the years and helped sit at her side during her illness.
Brigitte is predeceased by her parents, Helene and Georges Bucher; husband Gunther; and is survived by siblings, Thesi, Elisabeth (Heinz), Klaus, Irene; and children, Roland, Susan (Bernard), and Michael (Elizabeth).
Cremation has taken place and a private service will be announced through family in the coming weeks.
In lieu of flowers, donations can be made to Centre Flavie-Laurent.