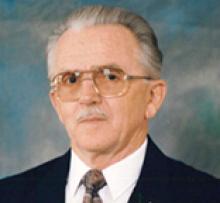 Peacefully, following a brief battle with cancer, Frank H. Sawatzky, aged 93, of Steinbach, MB, passed away on Monday, November 11, 2019, at Bethesda Regional Health Centre, Steinbach, MB.
He is survived by his beloved wife Rita; his sons, Ken (Linda), Walter (Joy), Bob, and Ron (Denise) and their families; as well as Rita's son Vic Klassen; daughters, Marlene (Dennis) Dueck, Carol (Randy) Rempel and their families. He is also survived by his brothers, Henry and Art (Rennie); sisters, Kay Krahn and Mary (John) Falk; and sister-in-law Irene Sawatzky.
Dad was predeceased by his first wife Susan Klassen; parents, Heinrich and Maria Sawatzky; sister Susan Krahn; and brothers, Johnny, Jake and Abe.
Dad enjoyed 44 years of marriage to Susan Klassen and together they raised their family of four boys. Dad's teaching career in the Morris and Rhineland School Divisions took the family to various communities in southern Manitoba before they eventually settled in Gretna. After retirement, he and Susan went to Mexico to do mission work for seven years. Dad was broken by the passing of Susan in 1993 but focused his time on helping his children and their families. In 1996, Dad was fortunate to meet and marry his second wife Rita Klassen. He moved to Steinbach, where he welcomed, and was welcomed by, the second half of his family. He and Rita have enjoyed 23 years of marriage.
Throughout his life, Dad enjoyed playing sports such as golf and curling. He was also an exacting woodworker, building and repairing many things for family and friends. Dad enjoyed watching hockey (first the Toronto Maple Leafs and then the Winnipeg Jets) and, of course, his Winnipeg Blue Bombers, although he often had disputes with the officiating. In his later years Dad especially enjoyed watching the House of Commons proceedings on TV and developed passion for all things political.
Dad leaves a legacy of strong values for his children, grandchildren and great-grandchildren. He was a humble, hard-working, generous man with a deep and abiding faith in God. He appreciated the many blessings in his life and loved to give of his time and money to family and to many charities.
A Celebration of Life will be held on Saturday, November 23, 2019 at 2:00 p.m. at Birchwood Funeral Chapel, 162 PTH 52W, Steinbach, MB, with interment of ashes to follow at a later date.
In lieu of flowers, if friends so desire, donations in his memory can be made to Back to the Bible Canada.
Special thanks to Dr. Janz and the nursing team on the Rehab unit at Bethesda Regional Health Centre.