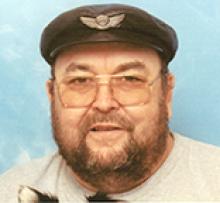 
Ron Ralston, aka "Rotten Ron", passed away while in the Grace General Hospital on Tuesday, November 5, after a battle with inoperable heart disease. He is now reunited with his best friend and soul mate, Jennette, and their dog Munchie.
Ron is survived by his sons, Brian of Calgary and Cory (Michaela) of Hamilton, and his grandchildren, Brander, Everley and Norah; his sister Dianne McCubbin (Ken) of Calgary, nephew Kevin McCubbin (Colleen) and niece Rhonda (Dylan) of Calgary. He is also survived by many other Ralston/Cook family members, and his extended Fortney (Jeanette) family members.
Ron was predeceased by his wife Jennette (2004) and his parents, George Ralston (1998) and Evelyn Ralston (2018).
Ron was born In Vancouver, BC, and as an infant his family relocated back to Manitoba where he grew up in the Anola, Dugald and Transcona areas. In his adult years, he lived and worked a short while in Thompson, MB and Calgary, AB before settling back in the Winnipeg area, working for CP Rail as a Brakeman starting in 1970 and retiring in 1997. He also ran a small independent freight claim/inspector business for a period in the 1980s.
In 1994, Jennette Fortney, a lost childhood sweetheart, had re-entered his life. The spark that had always been there between them now exploded into a burning forever love. They married joyfully in 2000 in a meaningful outdoor ceremony in front of family and friends. They remained married until her passing due to cancer in 2004.
Ron enjoyed playing games and keeping connected to family and friends on his computer; waiting for hockey season and fantasy hockey drafts, which included participants from many faraway places. Ron was enthusiastic about watching sports, especially the Bombers and Jets and some curling. He loved music and singing and enjoyed performing karaoke.
As his health and mobility declined, his phone became his link to his family and many friends. He loved talking on the phone even if it was a quick check in, and so appreciated those who took time to stay in his life. Ron gave everyone a nickname, and that's how he remembered you and stored that nickname in with his phone list.
Ron was a simple man, with simple tastes. He disliked braggarts and BS'ers, snobs and people with a poor work ethic. He loved children, dogs and cats, socializing and fishing. He loved his sons and was an enthusiastic spectator during their sports activities. Ron is remembered as that hockey parent in the arena who could be heard above the rest blowing his bugle and ringing his cowbell.
The family would like to extend special thanks to his friend Jessie Jones, and to his niece Jackie Cohen, and nephew Glenn Fortney, for their loving support during his final years and being there to hold his hand at the end.
Cremation has taken place, and at Ron's request there will be no formal service. The family plans to hold a Celebration of Life for Ron and interment of ashes in 2020. Further details confirming date and time of these occasions will be published at a later date. If you would like us to contact you when the date is decided, please leave a note in the "offer condolences or memory" section of this obituary (Winnipeg Free Press).