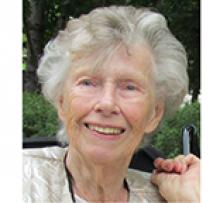 After a long life filled with adventure and love, Anne Chapman passed away November 9, 2019, at the age of 96.
Anne will be missed by her daughters, Wendy (Doug) and Judy (Mark); granddaughters, Jenn (Aaron) and Evelyn; and many grand-pets, as well as brother Don (Marie). She was predeceased by her parents, James and Margaret Hadden; sister Connie; brother Jim; and husband Clarence ("Tuck").
Anne was born in Glasgow and came to Winnipeg at age four. A quiet, book-loving child, she discovered her adventurous spirit as a young woman when she became friends with Shirley – a devoted friendship that never ended. The two of them set sail for England where they spent a fun year falling in love with the country and getting up to no good.
Back in Canada, Anne met Tuck and embarked on a new journey. They married in 1955. Not only did she marry the nicest man ever, she was embraced by the Chapman clan – a close, caring family. Anne and Tuck had two daughters. Anne was very much the mom and adored wife, but she still liked to dress up and get out so she eventually took a job at Eaton's.
The family spent Tuck's summer holidays camping. When he was at work, Anne and the girls would stay at Grandma Hadden's cottage at Grand Beach. As the girls grew up, Anne and Tuck ventured further, travelling to Victoria, Hawaii and Jamaica which they loved. And there were a few more trips to England with Shirl.
When Tuck passed away, Anne continued to work and to make new friends. For years, she enjoyed the companionship of Margaret French – Jenn and Evelyn's other grandmother – and the two of them travelled as well. It was always exciting to pick her up at the airport, hear her stories and see her photos and souvenirs. Summers were spent at the family cottage (now in Grand Marais) with all her girls and their many pets. She was thoroughly embedded in her girls' lives as a friend, confidant, financial and fashion advisor, and chief negotiator.
In later years, Anne moved to Sturgeon Creek II and started a short, but fulfilling chapter in her life. She met Sid Beaudin, and the two of them were a couple of 'swells', talking, laughing, and looking out for each other. After Anne moved to West Park Manor, Sid continued to be a loyal friend. What a lucky woman Anne was to have such a lovely sunset.
Anne enjoyed a long and full life. We will miss her, but we wish her joy in this next adventure.
Friends and family are invited to join us in celebrating Anne's life from 2:00 p.m. to 4:00 p.m. on Friday, November 22, 2019, at the First Unitarian Church on 603 Wellington Crescent.