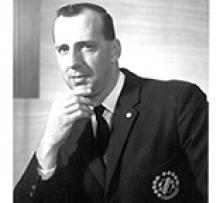 
It is with sadness that we announce the peaceful passing of our beloved husband, father, and Poppa, on November 13, 2019.
He was born December 16, 1931 in Winnipeg. Don proudly worked for the Winnipeg Police Service from 1953 until he retired with the rank of Sergeant in 1981. During those earlier years he devoted a lot of time to the Transcona Kinsmen which he found very rewarding. After retirement Don went on to work for the Winnipeg Jets and the Royal Canadian Mint and later enjoyed his many happy years of retirement with family and friends.
Don is survived by his wife of 63 years, Barbara, son Mike Pilcher (Liz), son Guy Pilcher (Gail), daughter Terry Kolbuck (Mitch); grandchildren, Corey (Quinn), Ryan (Natasha), Megan (Mike), Lauren, Kyle (Kayla), Jasmine, Michaila, and Dylan; great- grandchildren, Hailey, and Torin.
Thank you to Dr. Kevin Grace and the staff at Parkview Place for their compassion and care.
There will be a celebration of Don's life to be held at a later date.