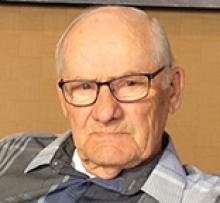 
Robert "Bob" Barrett, aged 82, of Winnipeg, passed away peacefully Wednesday, November 13, 2019, surrounded by family in the compassionate care of the Grace Hospital.
Bob was born October 15, 1937 in Portage la Prairie, the 12th and youngest child of Edith and Reginald Barrett. Bob is survived by his wife of 60 years, Aldyne; and their children, Nelson (Kim) Barrett, Nicolle (Steve) Bergeron, and Dean (Ron) Verrier; as well as adoring grandchildren, Calvin, Graeme, Liam, Scott, Cory, Daniel, Megan, and Emily, and their partners.
From very humble beginnings, Bob married his high school sweetheart in 1960 and built a 37 year career with Environment Canada, where he reviled in the "hardship" of having to meet and talk with people all across the Arctic, Prairies, and North West Ontario. In retirement, his resume expanded to part-time roles as gopher, beet topper, handy man, best friend, and John Deere lawn tractor aficionado.
Bob and Aldyne raised and nurtured three children providing them the education, opportunities, and support to succeed. Despite his work travel, there was never a hockey, gymnastics, soccer, or baseball tournament missed nor their 50/50 draw not enhanced. In retirement, grandkid activities became a full-time job: soccer, hockey, cheerleading, football, cross-country running, or rock concert. He was never happier than watching a close competition and being overtly biased as to his team!
Bob was the self-declared "fastest man in Portage" and was born to be a grandfather. His grandchildren, when young, were in awe of his fanciful claims, well spun yarns, and tall tales. While his grandchildren no longer believe his tales quite so readily, the sparkle as he told them is a singular anchor of their memory and love for him.
Beyond what he did, Bob will be missed for how he did it: self-deprecating, avoiding attention, with a quick sense of humour, a playful grin, and an uncommon openness to all he came in contact with. He was, in every positive sense of the word, a character. And the world is less bright and friendly today for his loss.
Bob was of strong Anglican faith and received his last sacrament before passing. His family hope heaven is never ending meals of "just a piece of meat between two pieces of bread", family back rubs, Bomber victories, winning 50/50 tickets, and looking over Aldyne.
A memorial service will be held 2:00 p.m. on Thursday, November 21, 2019, at Chapel Lawn Funeral Home, 4000 Portage Avenue.
Flowers and honours are gratefully declined. In lieu, the family asks donations to their charity of choice.