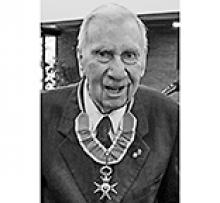 Dr. Paul Vincent Coldrey Adams died peacefully on Wednesday, November 13, 2019 of the complications of leukaemia just five months short of his 100th birthday, a milestone he had still hoped to reach until just a few weeks earlier.
He was a soldier in the Second World War, a country doctor, and later an obstetrician and gynaecologist in Winnipeg for more than three decades. He was a faithful member of the Catholic Church and a contributor to his community into his 10th decade.
To his family, he was a devoted son, a husband deeply in love with his wife Louise (neé Bernier) for more than 60 years, and a beloved patriarch to his seven children, 11 grandchildren, and as of the spring of this year, one great-grandchild.
He was a gentle and generous man with a dry wit. Though he was modest and self-effacing, he was nonetheless honoured by many of the organizations he belonged to or led. He was invested as a Knight of the Order of St. Gregory the Great by direction of Pope Francis in 2017.
Born in north London in 1920 to his young mother, Grace, he was transported a few months later to Winnipeg where his father, Edward, a veteran of the Canadian Expeditionary Force who fought in the trenches of France, had settled prior to the First World War. He grew up in St. James in humble circumstances, for a time in a home without indoor plumbing.
When he was 13, under the leadership of his mother, the entire family converted to Catholicism. He attended high school and university at St. Paul's College where he served as "Senior Stick" (student president) and was the founding editor of The Paulinian newspaper. After completing his B.A. in 1942, he enlisted in the Canadian Army. He served as a trainer of officers in Red Deer, Alberta for a time before being shipped out to England and later France as a member of the transport corps. He rose to the rank of captain and finished his army career in charge of logistics for the Canadian Army in Paris.
After the war, veterans' benefits allowed him to pursue a medical degree. In 1950, in the aftermath of the great Winnipeg flood, he married Louise and they had their first of seven children the next year. In 1952, he began practising medicine. In 1953, the family moved to Langdon, North Dakota where he had a general practice before returning to Winnipeg to pursue a specialty as an obstetrician and gynaecologist in 1959.
As the only Catholic obstetrician in Winnipeg in the 1960s, he was drawn into the debate on artificial birth control and reluctantly became a public figure because of his differences with Humanae Vitae. It was a measure of his devotion to the Catholic community that, with his wife Louise, he nonetheless established a series of organizations catering to women who wished to practice natural birth control. He was pro-life and was the founder of the Manitoba Physicians for Life. He believed that being pro-life imposed a positive responsibility to support women and helped Louise found Pregnancy Distress Service which continues to operate today as the Thrive Community Support Circle.
In the late 1970s and early 1980s, he was chair of the St. Ignatius Refugee Committee which successfully sponsored more than 40 Vietnamese refugee families.
In 1978, he was elected president of the medical staff of St. Boniface Hospital, which was the center of his practice for much of his career. He continued to practise medicine into his mid-70s. He delivered countless babies in his career and long after he retired, he would often meet people who would tell him that he had attended at their births.
After his retirement, he worked as a hospice volunteer, wrote two volumes of memoirs for his family, and continued to be active in the community and the church. He was a prodigious reader and an enthusiastic daily walker until just a few weeks before his death.
He is survived by children, Marie (Gordon Stobart), Paul, Mark (Nancy), Christopher (Sue), David (Adelina) and Michael; grandchildren, J.P (Tara), Matthew (Hana Bryce), Oliver, Jennifer, Christopher, Theresa, Kevin, Alex, Sophia and Melissa; and great-granddaughter Ruby. Besides his wife, Louise, he was predeceased by daughter Frances Louise, grandson David, and daughter-in-law Suzanne Szukits.
A Funeral Mass will be held at St. Ignatius Church, 255 Stafford St., at 11:00 a.m., Saturday, November 23. There will be a viewing at the church from 10:00 a.m. to 11:00 a.m.
In lieu of flowers, please donate to The Holy Names House of Peace, www.houseofpeace.ca


Family and friends may sign a
book of condolence at www.desjardinsfuneralchapel.ca.