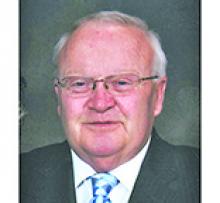 
On November 18, 2019, with his family at his side, Dennis peacefully passed away.
Dennis will be dearly missed by his wife of 51 years, Bernice; his daughter Tammy Adolph (Brian); his sons, David (Karen), Dietrich Brietfeld (Rachel) and Ernest Henderson. He will be fondly remembered by his grandchildren, Justin Hillier (Lisa), Jamie Giesbrecht (Ben), Sam and Ben Adolph, Ryan, Gabriel and Cody Brietfeld. His great-grandchildren, Jayde and Micah Hillier, and Rylan and Renae Giesbrecht, were his pride and joy.
Dennis is survived by sisters, Beatrice (Ron McDougal), Betty (Lloyd Wyspianski) and Edith (Alfred Kiesman); sister-in-law Margaret; brother Allan (Marlene); as well as Bernice's family, and many, many nieces and nephews.
Dennis was predeceased by his parents, Albert and Mary Rach, his sister Irene Young (Bill), and his brother Lorne.
Dennis was born on April 20, 1949 and grew up in Glenmoor. He moved to Winnipeg as a teenager where he worked construction. Dennis and Bernice were married on May 25, 1968 and in 1978 they came back to their roots in Glenmoor where he resided for the remainder of his life. Dennis was self-employed as an excavator and a trucker. His passion was trucking both locally and long distance.
Dennis and Bernice raised their family as well as many foster children, two of which became their own. He will be remembered for his humour and outgoing personality. He had so many favourite nieces and nephews - you know who you are!
Quotes from his memoirs, "We travelled, we vacationed, we cruised. We were very fortunate." "I drove over two million miles and never had an accident. I was proud of that."
Thank you to Dr. Partyka and all the staff at the Beausejour Hospital for their wonderful care and support.
A celebration of Dennis' life will be held on Saturday, November 23 at 11:00 a.m. at Sobering Funeral Chapel, 1035 Park Ave. E., Beausejour, MB.
In lieu of flowers, donations can be made to the Beausejour Hospital TV Fund.

Love and laughter did not end with his death.