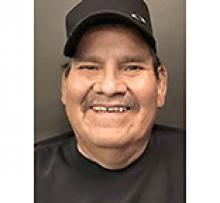 It is with great sorrow that we announce the passing of Ivan Leigh Williams, June 21, 1958 to November 18, 2019, beloved husband of Cecile Williams, mother Flora Williams; sisters and brother, Eileen Williams, Leona (Robert Bull), Gladys (Michael Ferchuk), Wilma Williams, Claude Williams (Holly); in-laws, Annie Dunbar, Bernard McKenzie (Bev), Ronnie McKenzie, Marion (Danny Moneyas), Barry McKenzie (Wanda), Rita McKenzie (Mervin); aunts, Nancy Clark, Janet (Hank Simard), Lillian (Allen Bushie); and uncle Clarence Peebles (Yvonne); numerous cousins, nieces and nephews.
Predeceased by son Corey Williams, father Arnold Williams, father-in-law Douglas Mckenzie, brother-in-law Kenneth McKenzie, sister-in-law Lillian McKenzie, sister-in-law Bernadette Matthews; nieces, Tanessa Williams, Lindsay Frohwerk; grandparents, and numerous relatives who had gone to the spirit world.
Ivan had many careers that he excelled at, logging, hunting, fishing, trapping, mechanics, carpentry, farming, and skills he learned from his father. Ivan also loved camping, yearly family trips to Shallow Lake with family, hunting adventures but because of medical reasons he had not gone in the last few years. He especially enjoyed cooking and baking bannock on an open fire. Later he worked as a Band Constable for Hollow Water, than moved on as a Corrections Officer, he worked as a Direct Service Worker for Southeast Child and Family Services, and he worked in the community for many years but due to medical reasons he was on leave. Ivan enjoyed working and teasing coworkers, friends and family, visiting with him was always fun, he loved to tell stories and he had an excellent memory of events, and people.
Wake services at Ivan and Cecile Williams residence, November 19, 2019 to November 22, 2019. Funeral service will be at the Hollow Water Band Hall on November 23, 2019 at 2:00 p.m., viewing will be at 1:00 p.m.
Pallbearers will be nephews, Jonathan Williams, Kyle Williams, Brenden Williams, Trenton Williams, Brady Bushie, Aaron Frohwerk, all nieces and nephews, and friends will be honorary pallbearers.
The service will be officiated by Rev. Norman Meade.
Thank you to all the dialysis team in Pine Falls, and all staff at St. Boniface Hospital who looked after Ivan all these years.