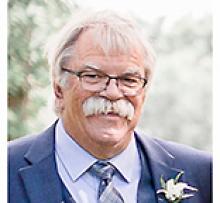 
It is with shock and sadness we announce the sudden passing of Lawrence (Larry) George Argue on November 20, 2019 at St. Boniface Hospital.
Larry was predeceased by his parents, Clifford and Helen Argue, and his father-in- law Neil Wither. He is survived by his brother Doug Argue (Heather), his loving wife Linda, son Daniel (Cara), and daughter Lindsay (Matty McGregor), as well as grandson Nixon, mother-in-law Verda Wither, many extended family and fur babies who will miss their plays, treats and walks.
Larry was born in Edmonton, Alberta on February 13, 1955 and lived his early life in Edmonton, settling for his remaining years in Winnipeg after moving around western Canada with his dad's job during his youth with his parents and brother. Linda and Larry met in 1977 and within a year they began a life together where there was never a dull moment. Larry graduated from the University of Manitoba and began his teaching career at Monroe Junior High, later moving to Westdale Junior High and finally Oak Park High School. It was at Oak Park that Larry co-managed the hockey team and he also chaperoned/survived two school trips to Europe.
Summers were spent at the family cabin in Sandy Hook - the cabin that he was always looking to upgrade, expand for grandchildren and constantly renovating. Larry retired in 2015, and he was now able to happily increase his time at Sandy Hook with Linda, as well as attending auctions to grow his collection of coal oil lamps - much to the family's dismay.
Larry was a very talented woodworker who built so many things for his family to enjoy and forever treasure. Many daycare centres also benefited from his talent and patience. He had a love for boats, spending time on the water and he successfully restored many different boats, including three classic Peterborough boats along with good friend Doug Bunting over the years. He was well known for not being able to sit still and was always busy puttering and building.
Larry lived his life filled with love, surrounded by his family. He was the rock of his family and was always willing to lend an ear, a back, and provide thoughtful words of wisdom. Larry proudly supported Linda, Daniel and Lindsay in all of their endeavours.
Arrangements have been made to celebrate his life on Tuesday, November 26, 2019 at 1:00 p.m. at Neil Bardal Funeral Centre, 3030 Notre Dame Avenue, Winnipeg.
In lieu of flowers, donations to the Heart & Stroke Foundation, 1379 Kenaston Blvd., Winnipeg, Manitoba R3P 2T5, would be appreciated.


It is with broken hearts we announce the sudden passing of Lawrence (Larry) George Argue on November 20, 2019.
Arrangements are pending.
Longer obituary notice to follow in Saturday, November 23, 2019 edition.