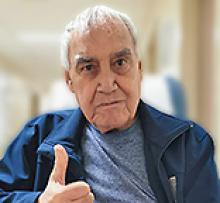 Joe Cyr passed away peacefully in his sleep on November 16, 2019 after a brief bout with cancer. He was 84.
Joe is survived by his four sons, Joe (Dawn), Gary (Joanne), Tom (Cathy) and Terry (Cindy). He had seven grandchildren: Joe and Dawn's sons, Joseph, Jordan and Andrew; Tom and Cathy's daughters, Kaitlin and Megan; as well as Brittany and Colin, Terry and Cindy's children.
Joe was predeceased by his mother Ann, and sister Margaret Badder.
Joe enjoyed constant visits with his family in his final weeks; telling stories and remembering good times with family, friends and especially in the hockey rink. He was a prolific hockey player growing up in Winnipeg, where he was born. By the time he played for the Winnipeg Barons in 1954, he was one of the best junior hockey players in the province. That same year, he played for the US National Champion Warroad Lakers senior team. Joe played professionally in the old Eastern Hockey League, as well as in the Ontario Senior League. He was a legend in the Southwest Manitoba Hockey League with the Carmen Beavers in the mid 1960s. In the 1970s and 1980s, he coached a variety of minor hockey league teams, as well as the St. Boniface Saints Junior A team for a number of years. He was one of the winningest coaches in league history. His 1980 - 1981 team won the MJHL championship. Joe was proud of the many relationships he developed and lives he impacted through his coaching and involvement in hockey. Joe was the founder of Joe Cyr Progressive Hockey Schools and pioneered the popular Super Summer Hockey League with thousands of participants in the mid 1970s through mid 1980s. Hockey was a big part of his life.
His other source of great pride and joy was his family. He talked often of the lives and accomplishments of his children and grandchildren. In recent years, he was able to see the next generation of his family with the births of four great-grandchildren.
A special thanks to the doctors, nurses, health care aides and staff at St. Boniface Hospital Floor 4B and Misericordia Hospital 6th Floor. Your unwavering care, treatment and support for Joe was amazing and will always be cherished
In lieu of flowers, donations are accepted by CancerCare Manitoba.
A Celebration of Life will be held 2:00 p.m., Friday, November 29, 2019 at Bardal Funeral Home, 843 Sherbrook Street.