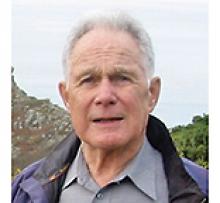 On November 18, 2019, Dr. W. E. (Bill) Abbott, aged 92 years, of Winnipeg, MB, passed peacefully at Health Sciences Centre.
He is survived by Nora Abbott, his beloved wife of 67 years, his sister, Elizabeth Scott, and his children, Brad Abbott (Susan Pridham), Sharon Vanderschuit (Wybo), and Fred Abbott (Barbara).
Bill was born and raised in River Heights in Winnipeg. He attended Robert H. Smith Elementary School and Kelvin High School, then earned his BA (1948) and MD (1956) at the University of Manitoba. Like his father Fred, Bill specialized in Obstetrics and Gynecology and practiced at the Abbott Clinic alongside his cousin Edward. They were both proud to continue the legacy of their fathers who founded the clinic in the early 1930s. Bill became Head of the OB/GYN Department at Grace Hospital in 1985. Countless Winnipegers came into this world with Bill's assistance. Grateful patients and their adult offspring would frequently stop him on the street to remind him of their connection. He was well known for his gentle and warm bedside manner --- a trusted and beloved doctor for generations of Winnipeg women and their families.
Lake of the Woods has always held Bill's heart. He grew up on the family's Arcadia Island, exploring the lake, learning every channel and bay. As a teenager, he became a fishing guide for CPR's Devil's Gap Lodge where he fell in love with a lovely young waitress from Kenora, Nora McLeod. They married at St. Alban's Cathedral in Kenora in 1952. After losing the beautiful cottage his parents built in the 1930s to a fire in the 1970s, he rebuilt. Bill's greatest legacy is the unwavering love of the lake he passed on to his children, their spouses, and six grandchildren. One way Bill fostered that love was the wonderful boat trips "down the lake" that he led until last summer. He knew the lake better than we ever will.
Bill loved spending time with family and friends, particularly in the outdoors. In addition to his love of fishing, he was an avid hunter, leading to many excursions with longtime friends to the marshes, sloughs and fields of the prairies. He was a founder of the unique railway boxcar ski village at the base of Holiday Mountain (La Rivière, MB). He and his cousin Ed purchased a retired railway grain car in the late 1960s, however, before renovations were complete a tornado threw the structure into the Pembina River. Undeterred, a slightly used mobile home replaced it and the family's lifelong passion for skiing took hold.
Bill will always be loved and remembered for his positivity, kindness, graciousness and unwavering loyalty to family and friends.
The family would like to thank the staff of Health Sciences Centre 5-GA for their kind and caring support of Bill on his final journey.
A celebration of Bill's life will be held in Winnipeg early in the New Year.
In lieu of flowers, gifts may be made to the W.E. Abbott Memorial Fund at The Winnipeg Foundation, 1350 One Lombard Place, Winnipeg, MB R3B 0X3. Tel 204-944-9474. www.wpgfdn.org