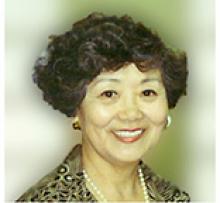 Lucy Shizuko Shimoda was born on August 25, 1929 in Vancouver, BC. She enjoyed a happy childhood with her family at their home in the Little Tokyo district of Vancouver, attending elementary school as well as the Vancouver Japanese Language School.
With the outbreak of the Second World War and the forced evacuation of all Canadians of Japanese ancestry, the family had to leave their belongings behind and were moved to an internment camp in Greenwood, BC. Lucy often spoke about how, at the age of 15, she had to travel on the train for days by herself from Greenwood to Winnipeg to reunite with her elder sister, Connie. The two sisters arranged the family move to Manitoba after the war. The family lived and worked in Parkdale before moving to North Kildonan.
In 1954, Lucy married George Shigeto Shimoda. Over their 45 years together, they travelled to many different places, including Hawaii, Florida, Las Vegas, and Japan. Their home on Bannerman was often the social gathering spot for family, friends, and neighbours.
Lucy was a hairdresser by profession, working for many years at Mario Labelle Hairstyling on Portage Avenue. Soon after the business was expropriated for Portage Place, Lucy and her partners bought the business, operating on Fort Street until her retirement. She became an avid golfer in retirement and could often be seen on the links with her friend, Bob Mukai.
A longtime member of the Manitoba Buddhist Temple and the Japanese Cultural Association of Manitoba, Lucy was an avid volunteer at the Manitoba Japanese Canadian Cultural Centre, making sushi for special events, demonstrating Japanese dance for school kids, and helping wherever she could.
After a long battle with dementia, Lucy passed away peacefully on Sunday, November 17, 2019.
Lucy was predeceased by her husband George (1999); father Heikichi (1957); mother Hatsune (1975); sisters, Kanaye Connie Matsuo (2014), Yoshie (1921), Hiroye Barbara Nikaido (2002), Mitsuko Mitsy Matsumoto (1978), Itsuko Irene Okano (2010), Takako Deanna Takahashi (1995); sisters-in-law, Kay Tatebe, Yosh Nakazawa, Misao Yahiro; and brothers-in-law, Charlie Shimoda, Archie Shimoda, Hiroshi Shimoda, Hisashi Matsuo, Frank Nikaido, Shig Matsumoto, Russel Okano, and Joe Takahashi.
Lucy is survived by sister-in-law Lillian Shimoda and many nieces and nephews. She was very appreciative of the care and support of her niece Pamela Okano, nephew Allan Okano (Shirley, Ryan, Adam and wife Krystin) and nieces, Joy Letkemann (Ted), and Lisa Shimoda-Loechner (Marc), throughout the years.
The family extends great appreciation to Devonshire House II and home care aides for their support of Lucy during her years there. As well, our sincere gratitude to the staff of Middlechurch Personal Care Home B2 for their excellent care. Thank you for always treating Lucy with patience, dignity, and affection.
As per Lucy's wishes, there will be no service.
In lieu of flowers, donations may be sent in Lucy's memory to the Japanese Cultural Association of Manitoba, 180 McPhillips Street, Winnipeg, MB R3E 2J9.