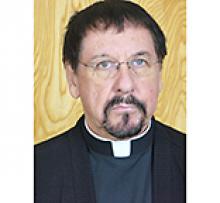 Reverend Gary Robert Killen, a priest of the Archdiocese of Winnipeg, passed away on October 25, 2019 at the age of 78.
Fr. Killen was born in Winnipeg on July 26, 1941. He was the son of the late Alexander and Jessie (nee Scott) Killen. He is survived by cousins, Malcolm and Margaret-Allison (nee Killen) Symonds and Janet Killen.
After studies at the University of Manitoba, where he received his B.A. in 1964, Fr. Gary attended St. Augustine's Seminary in Toronto. He was ordained to the Priesthood at St. Mary's Cathedral in Winnipeg on May 10, 1969.
Fr. Killen served in a number of assignments including, as Parochial Vicar of St. Augustine's Parish in Brandon (1969), and Immaculate Conception Parish in Winnipeg (1969 to 1972). He served as Chaplain to the Universities of Manitoba and Winnipeg (1972 to 1982) and as Parochial Administrator of Our Lady of Fatima Parish in Winnipeg (1979 to 1982). Fr. Killen served as Pastor of the St. Charles Parish in Winnipeg (1982 to 1983) and as Parochial Vicar of St. Paul the Apostle Parish in Winnipeg (1983). From 1985 to 1997, Fr. Gary served as District Chaplain - Veteran's Affairs Canada (including Deer Lodge Centre in Winnipeg). From 1997 until his retirement he served as a Chaplain at St. Boniface Hospital. In addition, Fr. Gary served as a Navy Reserve Chaplain, and for over 30 years celebrated the Saturday and Sunday afternoon Masses at Holy Rosary Parish in Winnipeg. Fr. Gary was also involved in the establishment of St. Nicholas Tavelich Croatian Parish in Winnipeg.
A Funeral Mass will be celebrated on Saturday, November 30, 2019 at Immaculate Conception Parish, 181 Austin Street N., Winnipeg, MB beginning at 10:00 a.m. The Most Reverend Richard Gagnon, Archbishop of Winnipeg, will preside. A reception will follow in the Parish Hall. Interment in the Priest's section of Assumption Cemetery will follow.