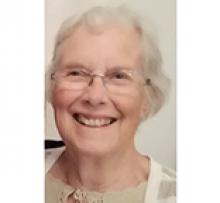 Adeline Muller spent her last few days as she had lived - peacefully, surrounded by friends and family and with a full calendar.
On the day she died (Sunday, November 24, 2019), at the age of 81, she was to play piano at her church as she had for 68 years. She was also an accomplished cello player, teaching privately and in the University of Manitoba Suzuki program (one student later attended Juilliard School). Her upcoming plans included participating in a Bible study group (going back 40 years), a seasonal gathering of old friends (a half-century old tradition) and planning a Christmas musical performance (a new initiative). Her travel plans in 2020 included Arizona, a cruise and travels with sister-in-law Libby. Her arts calendar had a slate of theatre and musical events and she had just started a volunteer position helping to teach English.
After her almost 60-year-old romance with Hugo ended with his death on May 13, 2019, Adeline did not look unfavourably on joining him, but she chose to make the best of her time with the rest of us until then - attending Manitoba Theatre Centre, having meals and walking with friends and family in the days and hours before an unexpected hemorrhagic stroke sent her to St. Boniface Hospital.
She was in no hurry to leave her children, Jeffrey, Krista (Andrew), Carl and Tanis; her grandchildren, Chanelle, Braedon, Ashton, Kieron, Elena, Emma, Hannah, Monty and Evan; her great-grandchildren, Noah and Kylan; her siblings, Ernie, Ted, Viola; and her sister-in-law Libby.
In her final hours she found the strength to smile and say "I love you" to all.
Adeline was predeceased by her husband Hugo Muller; her father and mother, Henry and Anna Redekop; her brother Clarence Redekop, and brother-in-law Max Schatz.
Her cello career, launched in Ben Horch's Winkler school orchestra, continued under the tutelage of Peggy Sampson. Adeline was adventurous enough to break her ankle falling off stilts and, as a student, travel alone through Europe. Her studies at Teachers College and at the University of Manitoba led to a love-at-first-sight encounter with Hugo and to teaching positions in Steinbach and Brandon. While Hugo taught in Thompson, Adeline juggled two young children, helped to launch its Music Festival, was active in the Mennonite church and completed her ARCT diploma in piano.
Adeline and Hugo set the parenting and grandparenting bar incredibly high, showing endless patience, as well as hospitality toward all at their home and Belair cottage. Their time and love for their children had no bounds. Her siblings quite seriously referred to Adeline as a saint because of her care and compassion for her family, friends, church and for communities near and far. She and Hugo worked with people living in poverty in Arkansas, with the families of those on death-row in Georgia and they spent many winters in Oliver, BC with the Gleaners, making dried soup mix that was used for food aid around the world.
Adeline had a deep understanding of her father's love of learning, reading constantly, and she shared her parents' Christian faith. This faith and her whole life as a loving, non-judgmental wife, sister, mother, aunt and friend made the world a much better place.
A memorial service will be held at 2:30 p.m. on Saturday, November 30, 2019 at Church of the Way, 450 Lilac Avenue.
Friends and relatives are encouraged to share in a photo-tribute, stories, and condolences for the family by visiting Adeline's memorial page at IntegrityFuneralPlanning.com