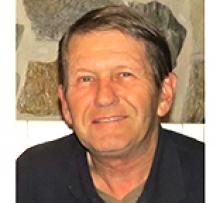 
It is with great sadness that we announce the passing of Reynald Goulet, beloved husband, father and friend, on Wednesday November 13, 2019, surrounded by family.
Left to cherish his memory is his wife of 51 years, Corrinne; son Joel; and daughter Suzanne (Trevor). As well his brothers, John (Gladys), Henri (Louise) and Paul "Lazlo" (Shanne); with numerous nephews, nieces, cousins, and many friends. He was predeceased by his parents, Annette and Roland Goulet.
Rey was born on October 21, 1945 and was raised in Dufrost, MB. At an early age he moved to Winnipeg, where he attended College St. Boniface and the University of Manitoba and obtained his teaching degrees. His teaching career spanned several communities, including Ste. Anne, Lorette and Ile des Chenes. While in his younger active years, Rey played several sports such as baseball and golf, but hockey was his passion, where he excelled for many years. Rey also enjoyed a lifetime of hunting and fishing.
He met the love of his life Corrinne and moved to Dufresne, where he started a family. Rey was very fond of his two children's accomplishments, that being sports and horse competition. Rey followed his kids around the country for all of their hockey and ringette tournaments, along with Suzanne's numerous horse shows.
After retirement, Rey and Corrinne enjoyed many winter getaways to different southern destinations, including the many crazy road trips to Mexico.
In his later years, Rey and Corrinne adopted a much fonder love for the game of golf, and they could be found playing all over southern Manitoba. Up until his health rapidly declined Rey could still be found outdoors doing the fun and simple things of life. He took much pride in his yard, garden and especially his trees. He was an avid follower of sports, but mostly every single current affair that made the daily newspaper.
He was a devoted husband, father, and great friend to many, who will be lovingly remembered for his strength, courage, kindness and outgoing spirit.
The family would like to thank the caring staff, doctors, nurses and health care aides at Bethesda Hospital in Steinbach.
In lieu of flowers, please consider a donation to a charity of your choice.
At Rey's request, cremation has taken place. A celebration of Rey's life will take place at a later date.
All are encouraged to share memories at Winnipeg Free Press Passages.