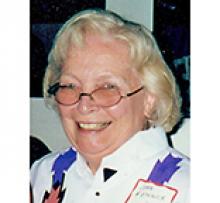 Jean Margaret Fenwick (nee Harris) peacefully passed away November 21, 2019, the age of 91, at the Riverview Health Centre in Winnipeg from pneumonia.
She is survived by, and will be dearly missed by, her children, Drew, Leigh and Blair Fenwick; grandchildren, Kieran and Tristan, and younger brother Keith (Pat) Harris. Her husband, Donald Reid Fenwick predeceased her in 1996, and her brother Rodney Harris a few years later.
Jean was born in Bombay, India on January 21, 1928. She was raised in India and moved to England after Indian Independence in 1947. Shortly after, Jean immigrated to Toronto, Canada. She worked for Clark Foods and the Metropolitan Toronto Police Department as civilian support staff. She met her husband Donald Fenwick while on holiday in Val Morin, Quebec, and they married in 1960. They settled in Montreal until 1967 when they moved to Winnipeg for his job with Touche Ross.
She lived most of her life in Winnipeg, except for a five year stint in Toronto. During that time the family acquired an island cottage in Muskoka. Hookery Island connected many branches of our extended family and many memories were made with friends and family there.
Jean had a reputation for being an excellent if not a gourmet cook and truly enjoyed preparing meals, always learning and perfecting new cuisines from all over the world.
Jean had many involvements in the community: one of the founding board members of Osborne House battered woman's shelter, also on the YWCA and Manitoba Museum Boards. She was a patron of the Arts: R.M.T.C., R.W.B., W.S.O. and especially our parent's favoured Prairie Theatre Exchange.
She was an artist, a graduate from the Ontario College of Art, where she learned and refined natural gifts in design, sculpting the human form, pottery, calligraphy and watercolour. This was a labour of love that brought her joy throughout life.
As per her wishes, cremation has taken place, there will be no public service. Her ashes will join Father's privately at a future gathering of family.
In lieu of flowers, in keeping with Jean's desire to support the arts - those wishing to make a gift of remembrance in her name may contact the Prairie Theatre Exchange Foundation, (204) 942-7291, Unit Y300 - 393 Portage Avenue, 3rd Floor, Portage Place, Winnipeg, Manitoba R3B 3H6.
Our family wishes to express our sincere thanks to the direct care staff at Riverview Health Centre whose many years of service to Mom made, especially in her later years of declining health, pleasant and comfortable.