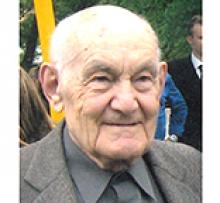 On November 18, 2019, at the age of 91, Henry Enns of Winnipeg, MB passed away peacefully at Health Sciences Centre with family at his side.
He is survived by his beloved wife, Elizabeth (Betty), of 67 years; and his sons, Henry (Susan) and Peter (Colleen); five grandchildren: Teresa Tataryn (Jeremy), Amy Harris (Phil), David (Jordan), Derrick (Alex) and Craig (Melisa); three great-grandchildren: Emily, Audrey and Grace; and a large extended family.
Henry was born and raised in Neuendorf, Ukraine. He immigrated to Canada in 1948 at the end of the Second World War. He met Betty, the love of his life, at a German social function and married her on October 4, 1952.
Dad worked in the home building industry for his entire working life, starting as a truck drivers' helper, moving up to purchasing, estimation, and running a lumber yard and distribution centre. Employers included Redekopp Lumber, Metropolitan Construction, Quality Construction (Qualico), Engineered Homes, Olympic Building Systems, and in retirement consulting to Hilton Homes, Kensington Homes and Pedlar Building Services.
Mom and Dad lived a life for others, helping family and friends. Dad built numerous homes and cottages for both of his sons and various brothers/sisters-in-law. He was there to help renovate, paint, build fences, sheds, decks and gazebos for all; a man who could always be relied on to get things done.
Dad suffered his first heart attack at age 46, with his first bypass surgery shortly thereafter. Exercise became an integral part of his life and as a testament to his drive, he completed the full Manitoba Marathon in 1980. He was a founding member of the Reh-Fit Centre, jogging there on a regular basis for over 30 years. Dad had his second bypass surgery in 1992, followed by various other health issues, none of which slowed him down.
Dad was a wonderful husband, father, grandpa and role model and will be dearly missed by all.
A private family funeral will be held. In lieu of flowers, donations in his honour may be sent to Heart & Stroke Foundation of Manitoba.
The family would like to thank the staff of Health Sciences Centre Neurosurgery GA5 for their kind and caring support of dad on his final journey.